Apparently I can’t shake living on European time, not that my sleep habits in the States have ever been that great. As I write this post it’s currently 3:30am and I have been awake for at least ninety minutes.

I am now finishing today’s post at 6:35am, having gotten no sleep since starting it nearly three hour ago. In the interim I updated/backed-up the software on my laptop, listened to podcasts, shaved/showered, and drove to work.

Today may be tough.

“Interesting”
At least for now I still have a job at “XYZ Corp”. Some people, including the other iOS developer, have decided to work elsewhere.

In the next two weeks I will have a lot to learn, and until another developer is hired I will have the entire weight of the app on my shoulders.

Now in addition to all of the other things on my summer agenda, this weekend I will start learning Swift in earnest and practicing all of the bullshit tasks asked in interviews. Why? Juuuuust in case. 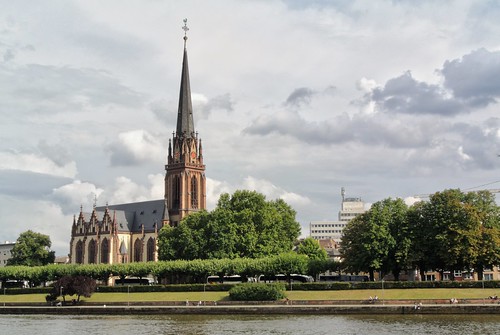 I have five shots of DreikÃ¶nigskirche (Three Kings Church) in my photo library, but this is the only one that I shot where the sun broke through the clouds and illuminated it nicely. I like it…

Theoretically this will be the last of the European photos to be posted to the blog, which means that I better find some photos to shoot this weekend.

Always. Be. Closing.
Since the 1980s I’ve stated that “Glengarry Glen Ross” is my favorite movie. I loved the cast, I loved the tense plot, and I loved that it were essentially only four sets used for the entire movie.

In 2005 I traveled to New York to see a revival of “Glengarry Glen Ross”, starring Alan Alda, performed on Broadway.

In 2007 (maybe, but it doesn’t seem that long ago in my mind!) I saw a production of “Glengarry Glen Ross” performed on the Hertz Stage here in Atlanta.

It didn’t take me long after receiving the email notification to buy a ticket for
“Glengarry Glen Ross” at Pinch ‘N’ Ouch Theatre on Friday, August 11th.

Miscellanea
Consider yourself lucky, today’s post originality was going to be a post-mortem recap of my trip. 😉

– For last night’s dinner I made biscuits (from a can) but spiced them up by sprinkling garlic powder and sesame seeds on them prior to putting them in the toaster over; it was quite a success.
– I saw former-ITP-Reader “Martha” out running this morning; to be clear she was running, I was driving to work.
– My exercise routine begins again tomorrow. I may mount my bike on the trainer and ride along with le Tour.
– I guess Public Enema decided not to have “Cheesy Yellow Tour Party” this year. Pity, I enjoyed those and was certain that this was r the cute woman would notice me! (yeah, right)
– I will also restart “Get Rid of Shit” mode this weekend. You never know when I will do something rash like decide to move.

I am frustrated (for many reasons) because I know there are at least three other things I wanted to include in this list but have forgotten. Oh well, if I remember them I will add them in comments. Stupid sleep deprivation…

Have a great weekend all. Perhaps I will see some of you out and about.

12 Responses to It’s What Time?