Only Fools Rush In

Now that my sleeping habits have gotten adjusted back to the Eastern Time Zone I am sleeping later into the morning. I made it to 4:45am today! I’m not in a mood to rush anywhere this morning, so I’ve decided to bum around the house (and write this blog post) and will drag my ass into the office in a little while.

Amer, Amara, A Mano
Not Latin verb conjugation, these are names of bars/restaurants in Atlanta all within a mile of one another. If you ever want to confuse the public go ahead and name your bar/restaurant similarly to two others that are close by. I saw all three of these establishments last night, two of which I actually entered.

Two Out Of Three Ain’t Bad
The night started out at the “Surfer’s Den” at Beetlecat. The decor is what the ITP Estate’s basement could have been had I turned it into a bar. For those of you who can’t remember or have never seen the decor of my basement, it’s been over ten years since I’ve had a party, it’s “1960s modern” — wood paneling, shag carpeting, a bar covered in orange Naugahyde. Surfer’s Den takes it to another level, with period furniture, artwork, and touches such as stashes of 8mm film reels and 45rpm records.

Our large group of people, twenty-four I believe, gathered at Surfer’s Den for pre-meal drinks and appetizers. I liked the whole vibe of Surfer’s Den, and if I were twenty-five years younger would claim it as my hangout.

Due to the large size of our group we drew pieces of paper to see which of the two entree restaurants at which we would eat. The two unknown-to-us options were Barcelona and Char. Since I have already eaten at Barcelona (twice even) I felt fortunate when I chose Char. Those that chose Barcelona didn’t actually get to eat there as the restaurant “lost” their reservation, and apparently also had an issue with their kitchen. This group wound up hoofing it to Amara, a restaurant that has opened since I used to take Highland Ave as part of my morning commute to Dunwoody.

At Char, a Korean BBQ-grill-style restaurant, I ordered two appetizers — fried tofu, Korean deviled eggs — and an entree of oxtail stew. All of the food I ate was amazingly tasty. 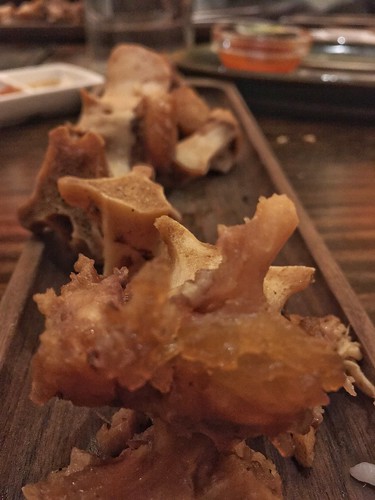 These were the remains of my delicious oxtail entree at Char.

My friend Darren’s oxtail is better, but this stew was worth going back to eat again.

While at Char we received updates from the other group because were scheduled to meet them again for dessert. They had eaten dinner at Amara because of this we thought that we were going to meet them at Amer, which is a few doors down from Char, for dessert. We were wrong. We were obviously not the first to be confused by the similar names because the bartender at Amer gave us detailed directions to Amara.

Unfortunately Amara’s dessert game was weak. We should have gone to Inman Perk instead so I could have had coffee instead of another beer for my dessert course.

My evening ended at 10pm when I left the group, who seemed as if they had no desire to end the night. After walking back to the M6 which I parked on Austin Ave, I drove home and nearly immediately fell asleep upon hitting my bed.

Now With No Alcohol, For Now
Along with packing on the pounds I have decided that I have been drinking too much alcohol recently. I’m no longer “on vacation” so it’s time for me to be a more responsible drinker again. Of course with my birthday being Saturday I will imbibe then, but tonight and tomorrow I am going to try and remain alcohol free. Shocking!

Have a great Thursday.

13 Responses to Only Fools Rush In