This is not quite the comprehensive blog that I anticipated because I am struggling today and am well behind schedule.

Today I present a mixed bag of things about which I’ve forgotten to write this week. I’m pecking this out at RiRa as this turned out to be a Happy Hour for One tonight. It’s funny, I came here hellbent on ordering a Reuben sandwich, but wound up ordering some fried pickle chips and a shaved Brussels sprouts salad instead. The pickle chips were okay, the salad (though not very “healthy”) was outstanding. 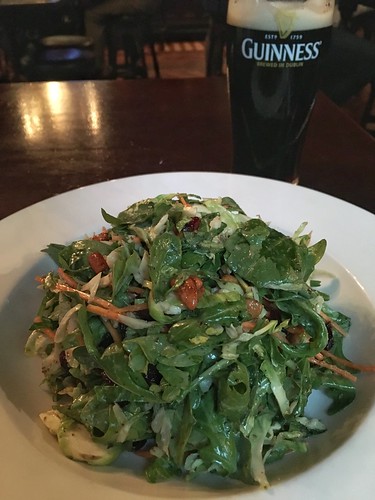 Starting To Get My Ducks In A Row
After consuming a few Guinnesses (Guinnei?) and some dinner I drove back the the ITP Estate to do some work. I’m trying to write a simple iOS app in Swift, including adding unit tests, and configuring Jenkins and Fastlane to do continuous development and deployment. Still awake? This is what I do for a living, but have never used any of these technologies until now. fall asleep by 8:30pm.

There is now a distinct possibility that I will be seeking work again before the end of this year.

Moreland Avenue in Little Five Points
I was confused driving up Moreland Avenue the other day because the DOT has restriped the section from Euclid to Dekalb, and have added a bike lane on each side. Theoretically this is a good thing, but a short disconnected bike lane is a useless bike lane.

On What I Am Spening My Money
So, I’m spending money again. I may not be spending it on the things that I normally would however.

I have purchased tickets for events at the Museum Of Design Atlanta. The first event, which was supposed the held next Thursday but has been rescheduled to August 31st. The second is a conversation between Debbie Millman, who has hosted “Design Matters” for a dozen years, and Paula Scher, who is a partner at Pentagram, an influential design company in New York. To give you an idea of how much of a big shot Scher is, she was the subject of one episode of Netflix’s “Abstract”. I’m also contemplating becoming a member of MODA. The museum, which is across Peachtree from The High, is conveniently located while I remain an employee of “XYZ Corp”.

On August 12th I may be headed to Columbus Georgia. Why? For whitewater rafting and photography. I say “may” because I hurt my leg working out yesterday; it sucks getting older.

I am a newly-minted soccer watcher, and have invested in Fox Sports Match Pass so that I can watch Bundesliga games at home, or wherever, on Saturday mornings starting this month.

I have decided that I am probably not going to Phoenix for InterAmericas Hash. I’ve not looked into flights to Phoenix, but the hash hotels seem to be really expensive to me, and I think that I could spend that money in other (better?) ways. I should sell my registration, but I’m terrible at this sort of thing. I need to use my “unlimited” vacation while I can, however, so I’m contemplating where I want to go in lieu of Phoenix. I’d really like to return to Germany again this year, but won’t.

Good weekend to you all!

7 Responses to The Leftovers