The results of an effort are relative and rely on the side of the fence on which you stand.

Friday Good For Me
No, not work, that continues to remain bad for me.

After work I drove up to the Perimeter Mall area to meet a bunch of former co-workers at Chuy’s. The meetup was fine, and I managed to abstain from drinking alcohol as well. (Wow!) Of course I planned an after-dinner beverage at The Georgia Chapter Room (nee The Fred), which made the evening easier to swallow soto speak.

Good Days To Be A Pantry/Freezer Item?
Depending on your point of view this was either a really good weekend to be a pantry/freezer item in the ITP Estate, or a really bad one.

For Saturday’s lunch I did my best jazz performer imitation by combining the following into a single meal — a box of garlic-parmesan couscous, a can of spicy Rotel tomatoes, a hamburger patty, two German frankfurters. Yes, it was a bachelor’s lunch, and was quite tasty to boot. I ate the leftovers as part of my day of grazing yesterday.

“I’m Not Indian, But Sometimes I Play One In The Kitchen” (Atlanta, Georgia, United States) 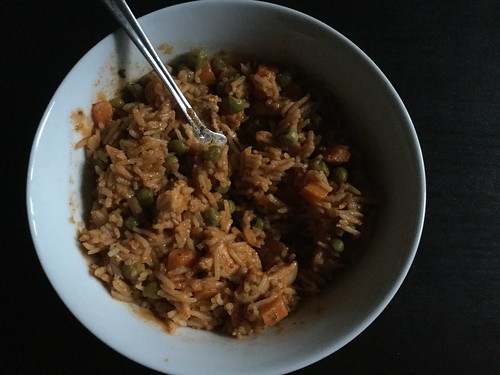 This is an Indian-inspired dish that I made for dinner on Saturday night. I put some cut up chicken breasts into a crockpot with a jar of Tikka Masala sauce. I cooked this on high for two hours, and then added a bag of frozen peas and diced carrots and cooked on low for another two-and-a-half hours. During the last half-hour of crock potting I cooked a batch of basmati rice that I seasoned with an Indian spice blend that I inherited last year. Not bad, if I do say so myself.

For dinner I freestyled again, experimenting more with cooking style than cooking flavor. I took a box of pasta, and cooked it in a pot containing four cups of water, two heaping tablespoons of Better Than Bouillon Chicken Stock Paste, a(nother) can of spicy Rotel tomatoes, and a jar of spaghetti sauce. After cooking the mixture (far too long in order to cook down the liquid, but at least the pasta didn’t disintegrate) I tossed in the rest of the Kraft Grated Parmesan dust in a jar in order to soak up most of the remaining moisture and bring the dish together. If it was my intent to reinvent the flavor of Chef Boyardee Cheese Ravioli in a can then the experiment was a smashing success. However, it was not, so I must give myself credit for trying, but that’s about it.

Of course I have leftovers, and will be consuming them as lunches this week.

The Lazy Man’s Answer
I have not been enamored with what I’ve seen with iOS 11 and was on the path to hold off installing it onto my iOS devices for a while. That all changed when I must have accidentally agreed to install it on my iPhone on Friday night / Saturday morning. When I woke the iPhone had been updated, which is a near-irreversible move. Dangen!

I called Apple out on this egregious behavior and their response was “We recommend that you update all of your iOS devices to iOS 11”. Of course you do. What a lazy answer.

So far I am not a fan of iOS 11, especially on “older” iOS devices.

And In (My) Sports
Good Day: Gators fan (though not for much longer I assume), Jets fan (though they tried hard to make it a bad day)

Bad Day: Mets fan (who am I kidding, this whole season has been bad), Falcons fan (donâ€™t know what to think about this team)

Boring Day: Werder Bremen fan (I had to include a new category for a team that has now played consecutive 0-0 matches, oh, and has yet to win a game this season)

I bid you good day.