After last night’s rather short 3.8 mile walk the boss and I went over to Taco Mac where I drank beers 599 and 600. I feel as if I’ve accomplished so much in life now.

Today’s Daily Challenge
Give your hands a one-minute massage.

Given the demands we place on our hands, it’s not surprising that stress and muscle aches and pains accumulate in them. Among the benefits of a hand massage are improved blood circulation, muscle relaxation, and range of motion. And giving yourself a hand massage is a great way to relax and de-stress.

Considered inserting a rude joke but thought better of it.

Hello Caffeine My Old Friend
I made it 2.5 weeks without coffee before deciding that an occasional cup was neither going to kill me nor make my throat drastically worse.

God it was gooooooood.

I’m back drinking decaffeinated tea this morning and may allow myself another cup on Friday.

Making A Deal With The Devil
Okay, Adobe isn’t that bad.
Yesterday finally relented and signed up for Adobe’s Creative Cloud; I signed up for the $9.99/month access to Lightroom and Photoshop.

“You, the non-photograper?”
Hey, watch it!

I’m hoping that this set of tools, especially the mobile versions of them, will be adequate for me to alter the photos on my iPad* that I take with my Nikon 1 V1. I’m further hoping that these tools will continue to be part of my photography workflow on my Macs as well.

Split Personalities
Because I am old and because I was an early participant in the online world I have some ancient account user names that break all of today’s modern “your email is your account name” rules. My iTunes account, created in the mid 2000s and my Adobe account created around the same time are fine examples.

First World problems arose when companies such as Apple and Adobe forced me to create new email-based user names for new services that they provided, and none seem to provide a mechanism for either changing your user name or merging two accounts. Unfortunately I cannot abandon my original identities because I have hundreds of dollars worth of software, music, tv shows, movies, and apps registered to them.

Is that a tiny violin between your fingers? 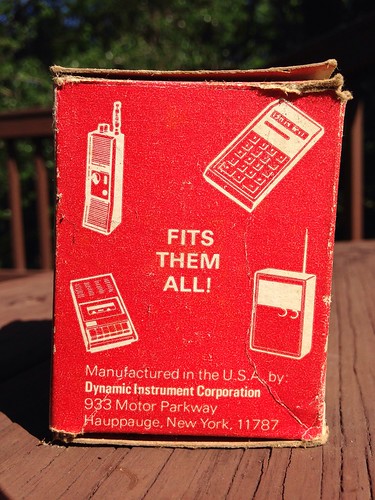 Old people like me recognize all four devices listed on this universal power adaptor’s box that I found in my basement while cleaning up last weekend.

Sometimes Procrastination Works Out
When I purchased the iPhone 5c as a replacement for the iPhone 5 that was starting to fail I inquired about selling it through a service that quotes you a price and you mail them the device to sell. I did this previously with my iPhone 4 and had a positive experience. The offer quoted to me for my iPhone 5 was $85, which was more than any other service would pay, so I conditionally agreed to sell it to them. The day after making the conditional agreement the service told me that I’d have to take the phone to AT&T to have them unlock it before I sent it to them. This previously-unmentioned extra step made the $85 seem low (when you factor in the hour or so it would take for me to go to an AT&T store and have the unlocking done) so I pulled out of the deal.

About a month ago Apple issued a service recall for some iPhone 5s (multiples of my model, “the iPhone 5”, not the latest and greatest model, the “iPhone 5s”) regarding the failures my iPhone 5 exhibited. When I entered my iPhone 5’s serial number into Apple’s website I found that it is eligible for free repair. Yay!

I plan to take it over to the mall store today or tomorrow so that they can repair it, and upon its return it will be my official iOS 8 beta development device.

Stats & Goals
Daily
Current Mood – pretty good
Current Music – silence at the moment
Website Of The Day – Had you been riding with me on Sunday you would have seen the maiden voyage of the Green Guru handlebar bag I bought last year. Made from recycled tires the square-shaped zippered bag has ample room for plenty of riding necessities, and a velcro-closed clear-covered section on top for maps (or when fit sideways an iPhone 5c that’s acting as my GPS).
Mode Of Transportation To Work – my car
Exercise (b)Log – walking, ~3.8 miles
Morning Weigh-In – 216 pounds (2014-05-30)