I stayed awake as long as I could yesterday, but the beer and the heat beat me by 7pm. Once back in my warm room I fell asleep and was up again by 10:00pm. [update: it’s now 12:10am and I am still wide awake and trying to figure out what’s next.]

I Didn’t Do It
While I had success, in a lot of ways I was a huge failure yesterday.

My plan to stay in a funky local hotel (or in the house of an AirBnB host) fell through when I had no internet.

I only had one German beer, and that was something I could drink in the States. The other two beer were Irish beers. (keep reading)

One semi-victory I had (at least I think I had) was calling AT&T and getting the $200(!) (apparently the charge for international data usage is $20/MB(!)) and getting those charges reduce to $30 by signing up for their International Data Plan.

Supposedly after thirty days this subscription gets automatically cancelled.

I (almost) Did It
After securing my air-conditioner-less hotel I walked around Frankfurt looking for traditional bars. I walked up and down three major streets (about seven blocks on each one) looking for some, to no avail. I stopped at two hotels and requested help and they each pointed me toward O’Reilly’s, an Irish pub (hey, at least they speak a form of English!), the place I finally wound up having dinner.

Finally, I passed a “beer and pretzel” bar and ducked it.

Me: “Sprechen Sie English? Mein Deutsche ist bad” (“Do you speak English? My German is bad [side note: I was supposed to say “‘schlect’ instead of ‘bad’])

(a menu was handed to me)

While I was was there a transvestite with a new boob job came in — seriously, I can’t make this shit up — and I picked up part of the conversation.

Finally I finished my beer and asked to pay, in German.

I was nearly proud of myself.

ITP Flickr Pic
“And So My European Journey Begins” 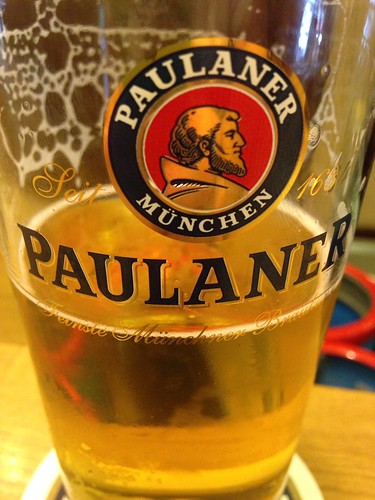 That beer I ordered.

I DID IT!
With my unwashed hair and a swagger that I get I big cities (don’t laugh, it’s true) I was feeling pretty German. And then it happened…

Sadly I had to reply “No.” because I knew I was headed down a slippery slope.

But it happened! Someone thought that I was German! Which I technically am since my father’s lineage derived from Germany.

Of course all of the people begging for money immediately spotted me as a tourist, and I didn’t even need to have my camera out to have that happen.

Will I Do It?
With no break in the heat until Sunday I am contemplating moving on to another (smaller) town, and seek out a hotel with air conditioning.