I Have The Urge To Purge

It’s back to the old format today, hopefully I can start doing interesting things in “normal” life to keep the momentum I gained in Europe.

Today’s Daily Challenge
While marching in place, bend forward at the hips and extend your arms behind you fifteen times.

This quick exercise will loosen your upper body, especially after a long period of sitting. Whether you’re at home or work, getting up and moving your arms and legs can help you burn calories, lower your blood pressure, and boost your energy level.

A Weekend Of Little Productivity
I joined my boss and a former coworker for drinks after work on Friday. We started the afternoon at Benchwarmers and migrated to Lucky’s Burgers And Brew to visit one of our new favorite bartenders. I have little recollection of the rest of the evening because I drove home, unpacked briefcase, and then promptly passed out on the bed.

I kicked around the house for awhile on Saturday before finally getting out to grab lunch at Fellini’s in Candler Park; it was weird when I realized that I have been eating at different locations of Fellini’s for twenty years. Without a plan in mind I drove around a little while afterward before returning to East Atlanta. I took a good nap, did some coding, and finally emerged from the house again for dinner. Sadly I wound up on Buford Highway eating crappy Chinese buffet. On my drive home Saturday night the Jackmobile’s dashboard “Brake Lamp” dummy light illuminated. Using my iPhone’s video capture capability I was able to determine which light had burned out with just a couple taps of the brake.

Even though there are three auto supply stores within spitting distance of East Atlanta I used the burned out bulb as an excuse to escape Dodge on Sunday morning. I drove all the way up to Chamblee to go to Auto Zone and then ate a predictably tasty lunch at El NorteÃ±o (aka Pollo NorteÃ±o). Again with no plan in place I tooled around town in the Jackmobile, now with 100% brake light illumination, and returned to the ‘hood. This time I kicked around the house, wrote some code, and finally got my ass out to mow the yard which had thankfully not turned into a gigantic weed farm in the three weeks since I last performed this task. After showering I noticed a text message from the boss who wanted to go out and exercise. Since I had just showered I decided to stay home instead and wrote some code before the finale of “Halt And Catch Fire” was to air. 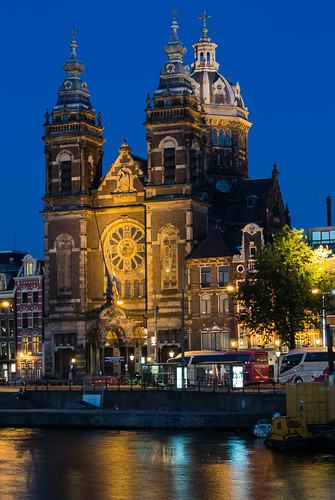 Yesterday I managed to process the few shots I took with my Nikon 1 V1 while touring Europe. As the title says this is Amsterdam at night; I have no idea what the building is, it just caught my eye.

Halt And Fizzle Out
If you’ve followed this space during July you’ll know that I’ve been into this AMC TV series Halt And Catch Fire, a story about a small Texas company that is trying to create an IBM clone “portable” in the early 1980s; I believe that the story is “based on a true story”.

Because I am an old computer nerd I have really enjoyed this series, including trying to determine where in the Atlanta area some of the scenes were shot. Last night’s episode left a gaping hole in my heart however as all it seemed to do was set up story lines for a potential second season. I won’t spoil anything here in case there is another old-time nerd out there who has not watched this episode yet.

Oh well, you pays your money you takes your chances.

My Urge To Purge
I woke up this morning with one, focused thought — “Holy shit. I own way too much stuff. How am I ever going to get rid of all this stuff?” Figuring this out will be my biggest personal project in August. Realistically I want to downsize to about half (or less) of the space that I currently occupy. In order to do this I will have to make some very tough decisions, but I must keep in mind that this is all just “stuff”, much of which has served no better purpose than making a house look lived-in for over a decade.

I might start a “Craig’s List / Freecycle” space here on the blog until the house is sold. I will post photos and descriptions of items, and the first one to claim the item in the comments gets the first shot of getting the goods.

Today’s Personal Project
Tonight will bring one of two activities. If the “birthday girl”, a friend of my boss, doesn’t flake on us we will be joining her for drinks and dinner at Henry’s Midtown Tavern. If she does flake, the boss and I have agreed to knock the racquetball around for awhile; I hope that my weekend of rest has provided sufficient time for my legs and feet to heal.

Stats & Goals
Daily
Current Mood – okay, though I feel as if I wasted the weekend
Current Music – silence at the moment
Website Of The Day – When it comes to writing I know that I do not follow the rules, including the way I capitalize my titles. If you are an English nerd you probably don’t need the service of TitleCase the way I do.
Mode Of Transportation To Work – my car
Exercise (b)Log – nothing
Morning Weigh-In – shit, should have jumped on the scale this morning

13 Responses to I Have The Urge To Purge