A Weekend Of Cold, Fun, And Poison Ivy?

My legs are having the same sensation that I felt after the last time I hashed. You know, right before I had my worst case of poison ivy ever. If not for the interview day, which has me committed until 2pm, I’d be headed over to Target to fill the Prednisone prescription that I received when visiting the doctor back in September. I guess that this will be on this afternoon’s To Do list.

With the exception of the poison ivy potential the weekend was, cold, snowless, but a success. On Friday night we had eight participants, and enough chicken to feed three times as many. Seriously, almost everyone showed up with chicken, enough to share. I had purchased two boxes of macaroni and cheese at the Pine Mountain Dollar General, because it was the first store I saw and I couldn’t remember whether or not there was a proper grocery store on my way, neither of which were opened due to the enormous quantities of food. Oh, I should mention that someone also brought sushi, and one of the chicken bringers also brought a bean soup.

Though I packed my bicycle and Super Suck went on a ride Saturday morning I just couldn’t convince myself to join her. It was very windy and rather chilly, and I just don’t have the clothing for such conditions.

It was nice to see ITP-Reader Steve arrive on Saturday to run what was a short, yet entertaining trail. This must be how I contracted whatever is giving me the beginning stages of itching today. This trail also confirmed that I need to get more exercise as not far into it I deemed myself to be “Wheeze Little Bit” as I huffed and puffed for oxygen.

I am now thinking of buying some Gaiters (oh, more on this later) in order to combat the ivy. These would at least cover the holes that brier have put into the tights that I wear hashing.

On Saturday night we burned enough wood to make a fire that could probably be seen from space, but given how cold it got we certainly needed it.

Steve, by the time I left on Sunday, about 11am (time corrected for Standard Time), we had gone through almost all of the wood that we unloaded.

How about a photo from the weekend? Sure. 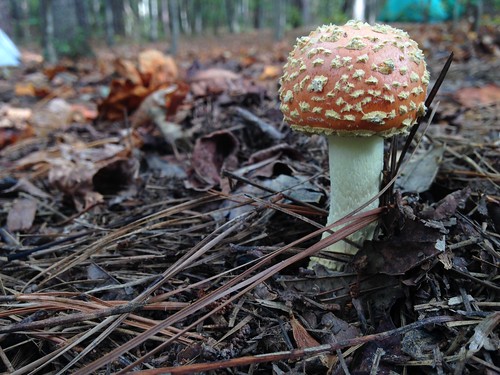 This is one of the varieties of mushrooms that I saw while roaming the woods for kindling on Friday afternoon. You can see the vestibule for my tent on the far left side of this photo, the other tent, up and to the right, belonged to Super Suck.

After unpacking the Jackmobile and then taking a brief rest I had to force myself to put everything away, take a quick shower, and drive up to the lavanderia to do laundry. On my quiet commute home (all electronics had spent batteries) I realized that I have committed myself to something every night this week so I needed to do laundry.

Of course in addition to my itchy sensation I am also now fighting off a cold/allergies. I think that this weekend I will stay home, inside, to find out if next Monday I can show up at work and not be sneezing and have a drippy nose.

ITP-Reader Barb, did you encounter snow?

Oh, and I’d be remiss to not say Go Gators at least once in this blog post. 😀 I never saw that coming.

4 Responses to A Weekend Of Cold, Fun, And Poison Ivy?