The Itchy And Scratchy Show

It started sometime on Friday, a persistent itch on the small of my back, where a tramp stamp would be if I were a tattoo pioneer.

By Saturday morning the itching spread to the back of my legs, causing me to abandon thoughts of riding.

The breakout did not go away by Sunday morning, causing me to abandon thoughts of a Sunday ride.

By last night the outbreak had appeared on the top of my feet, as well as the inner part of my arms near my elbows.

I am currently at my doctor’s office hoping they can prescribe something, or inject something, that will rid my body of this annoyance prior to liftoff on Wednesday.

My body…. I fucking swear…

The only two things that changed last week were both initiated by my saddlesoreness. First I returned to using a charcoal soap during showers near the regions first suffering from the outbreak. Additionally I used an “all natural” chamois butter for the first time during my rides on Wednesday and Thursday.

Changing two things at once, I’d make a terrible scientist. To be fair I had used the soap before so I never expected it to have any adverse affects.

Bucking The Trend
I went to Horizon Theatre on Saturday night for a great performance of “The City of Conversation”. The play, not exactly light-hearted, was well acted and enjoyable.

I was able to get my favorite seat in the back because I bucked the requested trend of entering to the right, which is slow because people linger about on set and try to figure out where they want to sit, and took the stairs left, much to the dismay of the woman handing out programs.

So Much For 0%, Part 2
After getting laundry done very early and then returning home for a nap, I didn’t sleep well on Saturday night nor any night since actually, I drove over to Colony Square for the Germany v. Ukraine soccer game viewing party.

There was a smallish crowd of German faithfuls there awaiting the game’s start.

I saw my teacher and spoke some very poor German with her. Well, her German was perfect. 🙂

I watched the chalk artists start the preparations for their masterpieces.

And when the beer was finally deemed “cold enough” I bought one. 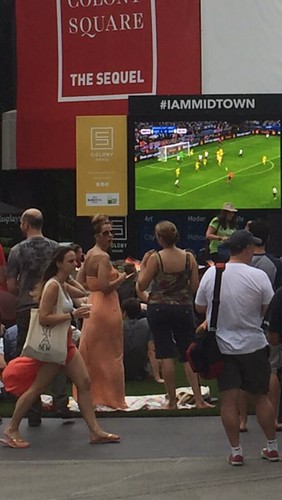 I’m obviously the large chuck of man in the white t-shirt sporting a European Man Bag. 😉

About fifteen minutes later the skies opened up with a quick, yet heavy rainfall. The chalk art was ruined, but at least Germany won 2-0 making the assembled crowd happy.

I’m On ‘roids
Doctor prescribed me some steroids and she called it into Target for me (something new the doctors do instead of giving a written prescription). On my way into the office I picked up my drugs and have ingested my first dose.

Hopefully I will scratch no more, or at least a lot less, by Wednesday afternoon.

14 Responses to The Itchy And Scratchy Show