Last night I did a new-to-me group ride from Dunwoody Village. As do many of the rides in this area of the city many of the roads on this ride are shared with other rides. The ride was advertised as twenty-five miles at a moderate speed. The distance was correct at least. The group sped away, dropping one guy in the first two miles. I managed to keep up for a little more than half of the ride before dropping back and riding with a couple of others as we made our own “B” group. Given that the route wound its way near our office Al and I decided to break away from the group and shorten our ride. I got in twenty-five miles when you factor in the distance ridden to get to the ride.

And Then Again This Morning
Because I was relatively awake at 5:30am this morning I decided to invoke my plan to ride again this morning. This time I took my twenty-five mile route that leaves Dunwoody and makes its way around Chastain Park, before returning to Dunwoody. My legs were still a little spent from last night’s effort, but it was the humidity in the air that really took its toll on me. At points in today’s ride I dripped water constantly as if I were a spigot with a leak. At the end of my ride I had consumed both of the water bottles that I had brought with me. 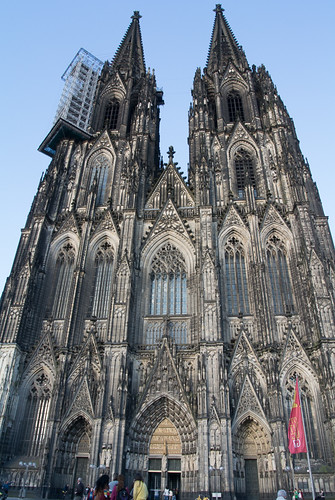 No tourist visit to Köln (Cologne) is complete without taking a photo of the Kölner Dom (Cologne Cathedral), at least from the number of people I saw doing the same as me every time I passed this landmark. Supposedly you can go inside, and even climb stairs to the top, but I didn’t have time for any of that sort of nonsense — there was Kölsch beer to drink!

Back In A Happy Place
PBS is showing the “third” season of The Great British Baking Show! The first episode was shown last Friday night, the next episode should be available soon. This show continues to please me.

I Nearly Booked Another Trip To Germany
Yesterday I received a very intriguing email inviting me to inquire about an intensive German Language trip to the wine region of Germany. Here’s a blurb from their site:

From the moment you arrive at our retreat location, you’ll be welcomed and looked after. You’ll be meeting a small group of highly motivated learners just like you. From breakfast to dinner, you are going to be surrounded by sounds and conversations in German.

There will be no formal lessons, no grammar tests. Instead, you’re going to navigate new conversations and new environments. If you forget a word, you’ll have to be resourceful: mime it, describe it, use another. The learning in this experience comes from living the language and discovering the real people of Germany.

I was very interested. However two stumbling blocks arose:
– The trip is for October 16-21, conflicting with my already-set plans to return to Black Mountain, NC for this Fall’s LEAF.
– The trip, excluding airfare, is $2900. Given that I will be making no income then, it behooves me not to make with this sort of fee.

Cheesy Weekend
The highlight of the weekend should be Public Enema’s “Cheesy Yellow Tour de France” party on Sunday morning. I hope the weather holds, and that I see a number of ITP Readers there.

13 Responses to Riding Into Friday