The weather, not so much me (yet).

The irony of the Cubs’s World Series victory not being the biggest upset of 2016 has not been lost on me.

I’m Looking For A Good Cave Or Bomb Shelter
Since I have vast experience living without sufficient plumbing I assume spending the next four years underground should be a piece of cake. Mmmmmmm….. Caaaaaake…..

I keep thinking back to that guy who talked to me in a bar in Corning, Iowa while I was riding RAGBRAI. He was so adamant about electing Trump. Picture “in his forties, drunk, racist, white male”, yeah that guy; he was one of only two people who I met over the past twelve months who told me that they were voting for Trump (I’m sure there are many more willing to tell me this today). I was in Iowa to have fun and didn’t want any confrontation, so I simply did my best to ignore him until he went away. Back then I was also confident in my political decision that I never expected to have to think about this guy again. 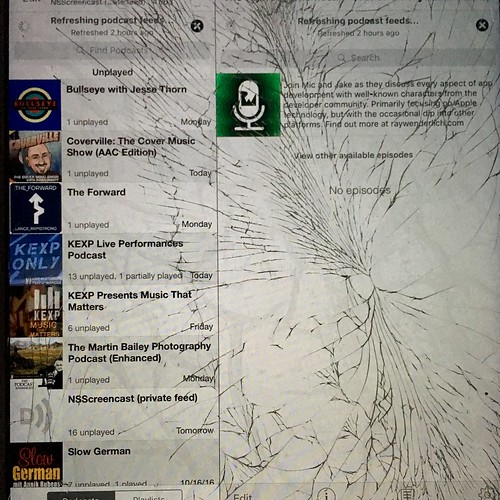 This is a representation of my current mood — shattered. I know that I am not alone, but that’s not helping much at the moment.

Don’t look for me at any of the rallies that are occurring, because I know the Electoral College has spoken and the results are now set in stone.

Changing My Tunes
My social media, news, and entertainment channels are all left-leaning. Every time I read or hear analysis of the election it reopens the wound and rekindles my concerns — kind of like when I look into a mirror these days. Perhaps I need to change my tunes, or enact a period of radio silence.

My Fucking, Non-Fucking Body
At least while underground I won’t have to worry about looking like a freak. Yesterday’s trip to the doctor yielded a diagnosis that the lump on my eyelid was scar tissue from the inexplicable inflammation that occurred last March. My doctor says that if I really want it removed I should consult a ophthalmologist, who may in turn refer me to a plastic surgeon.

Sounds complicated and dangerous.
Sounds expensive.
Sounds like I am going to look like a freak for the remainder of my life.

Maybe I will invest in an awesome eyepatch and tell people that I was pummeled by a bullying Trump supporter on Election Night. If I play it right I may be able to turn it into some pity-sex.

Today I will be dropping into a pharmacy and trying buy some stye medication. I know, it’s not a stye but if I can at least reduce the size of this I will be a little bit happier. And if I cannot I’ve had nearly fifty-one years of admittedly marginally-handsome “normality” to attract a mate and failed, so shame on me for wasting time.

Hung Jury
No, not the hasher…

Being a 35-year fan of Mould’s music it may not surprise you how much I was looking forward to today and tomorrow, that was until yesterday.

Trying To Find Outlets
Obviously I am not okay, but I will survive. I think that I will continue to blog and will make an effort to not be so dark. Ha! What makes me think that I can change after twelve years?

Once I found a functioning power outlet at the Chamblee Public Library yesterday I spent a good hour working on a programming tutorial about iOS 10 and Swift. I can honestly say that the thought of working in Swift thrills me as much as typing the phrase “President Trump” but that I know that it is the inevitable future so I will forge on; I’m sure that as time passes both will be palatable to me.

Upon returning home I used some of my pent-up frustration to cut down one privet “tree” as well as some of the branches on others that were providing easy access to my roof for rodents.

And Finally For Today — Some Shoutouts
I will end on a positive note. Shoutouts to the only thing that matters to me: money friends!

Shoutout: Hasher “Kitty Kitty Gang Bang”
“All I wanted was a Pepsi”. Back when life made sense (read “last Sunday”) she and I stood around a campfire and enjoyed sharing a moment joking about one of my favor songs, “Institutionalized” by the Circle Jerks. If you are a Repo Man soundtrack fanatic like me, you will know this song well.

Shoutout: ITP-Reader Al
I believe that Al and I will be lunching today. Since he is still gainfully employed, currently in the Norcross area, I expect we shall be dining out that way. If I can build up the muster I will be driving to Athens after our lunch. You know, since I’ll be half-way to Athens already. LOL! Hey! Look at that! I laughed for the first time in two days!

Shoutout: You
If you can point me to an outlet for entertainment that doesn’t involve politics.

Assuming I can find electricity and wifi in Athens (or wherever I wake up tomorrow) I will be back, if for no other reason than to honor the veterans who have served, and in some cases died serving, in order to maintain our freedom and American way of life. I promise none of the whining to which I have subjected you today.

9 Responses to Cooling Off