We are all a bit of both…

Winner: Me, regarding food. I ate an amazing doughnut with coffee for breakfast yesterday: 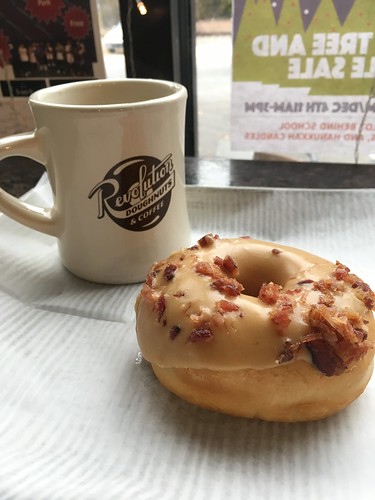 Yes, that is a bacon, salted-caramel doughnut…

(Minor) Winner: Me, regarding the Swift programming language. I followed breakfast up with a productive morning of work at the Decatur Public Library learning Swift. Slowly, but surely, I am dragging myself kicking and screaming into the world of Swift development.

Loser: Victory Sandwich Bar, because for some unexplained reason they were not open at lunch time yesterday. I was going to eat lunch there, but alas could not.

Winner: Raging Burrito, who was open. I ate a Raging Cajun burrito and because it was Monday (lunchtime) I received free chips and salsa. As an added bonus I heard an old song from “A Fir-Ju Well” the Atlanta band which is currently known as “Gringo Star”.

Loser: Me, regarding exercise and weight loss. Well, maybe not. I did manage to walk over five miles yesterday afternoon! Unfortunately my shins are hurting today. I also overdressed because for some reason I thought that it was going to be chilly outside and was uncomfortable for most of the walk.

Loser and Winner: Me, bar bingo. I met up with Hank last night at Lucky’s Burger and Brew for a few beers, and because it was Monday night some Bar Bingo. I tied with two others in the “Four Corners” game, ultimately losing the $10 house cash in a three-way draw. However, I tied with Hank and another guy in the final “Cover Them All” game and won that tiebreaker. I picked up a gift card for $20 in house cash, and I think that I am now part of their bingo finale that they will have at some point in the future.

Winner: The Green Bay Packers. Not that I watched the entire game at Lucky’s, and because I am a certified “cord cutter” could not watch the second half when I arrived at home because it was being aired on ESPN.

Winner: Me, regarding sleep. Because I couldn’t watch the game nor was I interested in watching either of the two DVDs — Capote, Olive Kitteridge — that I picked up at the library yesterday, I went to sleep fairly early.

Loser: Me, regarding sleep. I fell asleep on the futon in the den.

Winner: Me, regarding sleep. I nearly slept all night.

Loser: Me, regarding my eyelid. It still concerns me. I have my annual eye exam on Friday and will discuss my eye with my long-time optometrist to see if he feels that I should consult an ophthalmologist.

Losers: Atlanta Media Outlets, regarding yesterday’s house fire downtown. On my walk I saw and heard two helicopters hovering over downtown. Given that it was 4pm I assumed that there was a major snarl on The Connector, however a check of Google Maps showed no such traffic slowdown. I went to the mobile websites for WSB, AJC, and WXIA, none of which had any “Breaking News” about the situation. The top stories were something happening at Ohio State, and the impending rain (as if we’ve never had a heavy rainstorm pass through these parts). Finally when I returned home I saw a story about a house fire, well, I almost saw the story because when I clicked on the link the website never showed me more information. (I just read the story) I suppose a vacant house fire in Atlanta doesn’t warrant much coverage, but then why two news helicopters, when you consider all of the other pending concerns in this country.

Loser: Me, regarding dating. I realized that this past weekend marked the thirteenth “anniversary” of Jeannie ending our relationship by moving out. It was certainly nice having someone express interest in me this year, unfortunately that didn’t work out. I need to figure out how to not go so long until this happens again (because frankly I don’t have that many years left!).

Winner: Me, regarding finances. I managed to get through “Black Friday” / “Cyber Monday” hell purchasing only three things. I bought two books on Swift programming (investing in my professional future) and some nice-smelling, beer-based soap from Red Beard Brand (investing in my personal future if I ever again meet someone to date).

Loser: Me, regarding German homework. I had two weeks to get all of my German homework done. Class is tonight. Wanna guess what I will be doing today?

Have a great (and wet!) day friends.

13 Responses to Winners And Losers