I was hoping to be writing to you today fully recovered, walking as if the split-second riding mistake I made now eight days ago had never occurred. But I am not. I have had much more pain associated with this fall that the one six years ago, and as of now I am still unable to put my full weight on my leg in order to walk normally. I put my left knee in a brace yesterday and that seemed to help a little but I am certainly not anywhere near “right”. It’s a good thing that I still have my appointment with Dr Royster tomorrow. 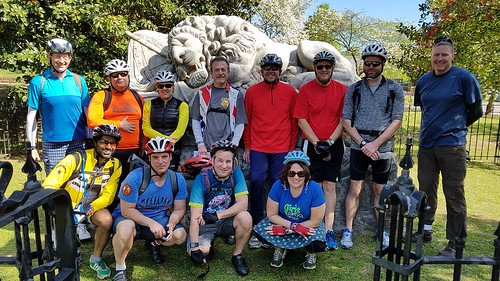 Taken about ten minutes before I would meet my demise. I was the first (and only?) one “voted” off the island. Had I only known then what I know now.

Off Again Today
I have another day off from work today, which would be a lot cooler if I didn’t have this injury still.

I may go to IKEA, because I want to buy a couple of cheap desk organizer items for my new work area at “XYZ Corp”. I know exactly what I want, where they are, and the shortcuts to get me out without having to walk the entire maze. I’ll have to see how the hip, leg, and knee feel about this.

Saturday’s Trials And Tribulations
Because of my immobility for nearly all of last week my efforts to collect a lot of things to recycle at the City’s recycling event fell flat. In the end I decided that the scant amount of things that I was certain that the people would take for recycling did not justify the effort of getting there.

I hobbled to Horizon Theatre on Saturday night to use the ticket for “Nobody Loves You” that I purchased a couple of weeks ago. The play, which is a “behind the scenes look at a reality dating show”, was hilarious. At first I thought that it was going to be a musical and that I would dislike it, but in the end it turned out to be a comedy with musical numbers which I liked quite a bit. I’d tell you to go see it before its run at Horizon Theatre ends on March April 30th, but I know that you probably won’t. 😉

Prior to the show I ate dinner at Manuel’s Tavern. Check off another place that I hadn’t been to since I was dating last year. In fact the last time I was in Manuel’s was before Trump was elected and I shook Bill Clinton’s hand. Ah memories of better days…

Spring Riding Future In Complete Doubt
Given that I am not moving painlessly today I am almost 100% sure that I won’t be riding the BRAG Spring Tune Up this weekend. And if I am not completely pain free I will also not be going out to Rutledge to camp. Dangen!

Also in jeopardy is my attendance for Bo Bikes Bama in Auburn, Alabama the following weekend. Double Dangen!

Positive Spins
I have been a long-time fan of “America’s Test Kitchen” and was dismayed to hear last year that founder and long-time host Christopher Kimball was leaving due to contract disputes. Over the weekend I discovered Milk Street, Kimballs’s new venture, which sounds identical to his old venture. Now that I have income again I may do wild things like subscribe to magazines.

Yesterday I made a kick-ass crockpot of pork loin. I had a 4-lb loin in the refrigerator that I purchased pre-injury and wanted to cook it before it went bad. I resurrected an old recipe that I used to make for the folks at work, Slow Cooker Carolina BBQ Pork, substituting the loin for the pork shoulder. Due to the size and cut of meat I used compared to that called for by the recipe mine was completely cooked in nine hours on low, and probably sooner had I thought to check the hunk of pork with a meat thermometer sooner. It was amazing. And as you can imagine, I have plenty of leftovers to eat this week.

Yesterday I also procrastinated a ton by listening to the Mets v. Marlins game using the MLB iOS app. The Mets were no-hit for eight innings prior to getting a hit. Then with two-out in the ninth the Mets scored two runs to tie the game! In the bottom of the ninth it sounded as if the Marlins were going to win but the Mets threw the runner out at home plate! HOW EXCITING!!! And then the next batter homered to end the game. The Mets lost the last three of the four games played in Miami.

On Wednesday I will become a cane owner. I started out thinking about buying trekking poles, because then at least I could look cool, and own trekking poles. Then I found an inexpensive cane on Amazon and decided to go that route. Pity that it can’t be here tomorrow, but I did order on Easter Sunday so I could expect no faster shipping.

Make it a great Monday all. I hope that you start your week painlessly; I wish that I could’ve done the same.