I Am Ready For A Long Weekend

Though I have no plans for this long weekend I am looking forward to it. I plan to spend the next three days cleaning, purging, fighting off pain, and thinking about my future.

Food Truckin’
I met up with my friend Al at the food truck parking lot yesterday. With the options at hand I chose to buy a Cuban sandwich and some croquettes from one of the trucks.

Al and I wandered back toward or respective offices carrying our food, catching up on life. Because I haven’t been riding this spring I have not seen Al as much as I did in the past when we both worked for Echostar and rode after works a couple of times a week. 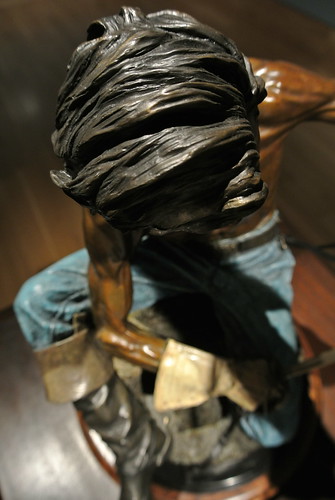 As with yesterday’s photo I played around with the way I took the shot for this one. For this shot I held the camera over the statue and shot downward with a wide aperture in order to,get a shallow depth of field.

My trip to my happy place started on a bad note when I received an email showing me that the coffee table I bought no more than three months ago had dropped in price by $50 from $179 to $129. DÃ¥ngen! It is not routine for IKEA to drop prices, especially on something I have purchased.

I walked the mile path, dreaming of a different life and restraining myself to put only four things into my shopping bag â€” two of which were chocolate bars. When I saw the long lines at the insufficient number of open registers I nearly dumped the contents of my bag and walked out. However, I talked myself off the ledge by reminding myself that I was at IKEA to be happy and to wait out traffic.

It was almost 7:00pm when I arrived home, still needing to figure out what I was going to eat for dinner. Malaise won out, I ate a ham and cheese sandwich.

It will be another short night for me tonight because I am attending Creative Mornings Atlanta this morning and won’t get into the office until around 10am.

Have a wonderful Memorial Day Weekend for those of you in the US.

19 Responses to I Am Ready For A Long Weekend