DÃ¼sseldorf is like an old friend. To me it’s incomprehensible to think that it’s been a year since I have been here. Except for getting lost twice already,
It feels as if I were here just last month.

It’s already the final day of June 2016. It may be time for me to do something drastic…

Last night I ate at Zum Schiffen, a restaurant at which I ate twice last year, and followed that up with a trip to the Irish bar at which I also made two appearances last year. To add newness to this affair I drank five Alt Biers, fear not they are low alcohol and served in small sizes, at a bar across the road from my hotel.

Those Who Fail To Learn From Their Mistakes Are Destined To Repeat Them
Guess who booked a hotel without air conditioning during a German heatwave.
It’s like I am back in the ITP Estate, but without my fans. At one time I thought about packing my camping fan, but failed to put it on the packing list so it never made it into the backpack.

Fortunately it appears that the heatwave will break today, but there may also be rain associated with the cold front that will do so.

Uh Oh, I Think I Have Put On Fat
I have overpacked for this trip, with exception of the things I failed to bring. Fortunately at the last minute I remembered that I owned the shorts that I wore on last year’s bike ride along the Rhine. These shorts are (were) too big for me, and because they are not cotton are lightweight and will dry much quicker if/when they get wet.

It’s important to have the larger shorts since the pair I wore two weeks ago, and laundered on Monday, are a bit snug. My body no longer humors me, it out and out anger me.

It’s a great thing that I will be walking my ass, which along with my burgeoning waistline also angers me, because I plan to eat like a fiend while I am here.

When I return from vacation I will start making a concerted effort to rid myself of my “dad bod”.

ITP Flickr Pic
“If I Had Only Known” (DÃ¼sseldorf, Germany) 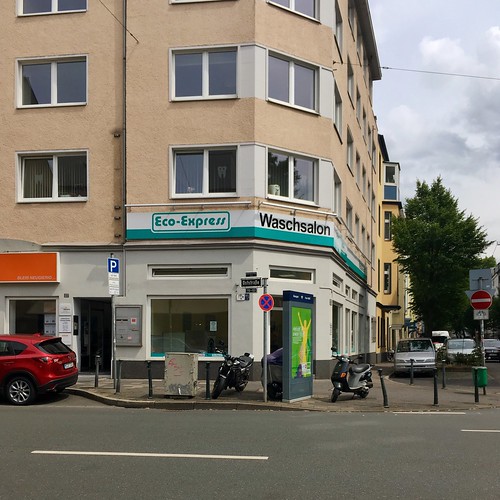 Well, well, well, look what exists at the corner of my hotel’s street. Perhaps I should do a load or two and show the Germans just how laundry should be done. #TheMoreYouKnow

My Ability To Speak German Has Been Greatly Exaggerated
I didn’t have the greatest day experimenting with my German. I failed fast, hard, and often at every turn. I will keep trying…

A Chip Without A PIN
For some reason when I tried to purchase a ticket for the train using my credit card it wouldn’t let me continue without a PIN.

My card doesn’t have a PIN.

So, I did the next best thing and went into the Deutsch Bahn ticketing office at the train station and bought a ticket from a person. Their credit card machine was okay with only forcing me to sign the receipt.

I also stumbled trying to pay for the hotel room using my AmEx because the small family-owned hotel doesn’t take AmEx.

Paying my Visa bill is going to hurt next month. Until then I am going to try to enjoy life and encourage you to do the same.