I am no scientist. I realize today that this whole solar eclipse thing is going to last much longer than I expected. The fact that I will still be in Raleigh North Carolina when it occurs combined with the expected heavy traffic delays on the road, means that I probably will not be getting home tonight as expected. Time will tell.

That Time I Felt As If I Were Going To Die
I nearly didn’t make it to Raleigh this weekend, in fact I feared not even making it OTP. I left the ITP Estate on Friday morning deeming the traffic rush on Friday to be over. On my journey around the perimeter to get to I-85 North the SUV in front of me decided to come to an inexplicable near-complete stop somewhere around Chamblee-Tucker Road. I was forced to slam on my breaks, coming to a controlled stop of my own, and feared that I was going to be rear-ended by the driver behind me. Fortunately no accident ensued.

Perhaps it was pre-solar-eclipse nervous energy on the road but this trip to Raleigh was one of the most nerve-wracking that I have ever had. Somewhere just north of Charlotte there was another accident on I-85 and at that time I bailed on interstate driving and opted for state and US highways instead. 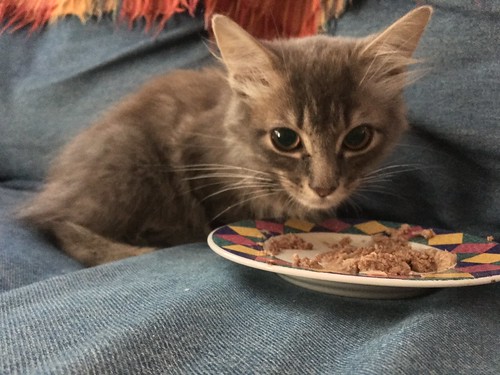 This somewhat blurry picture of a kitten eating food off a plate is of “Deluxe”, the newest resident at the Raleigh Royalty’s Estate.

It’s Not Hip To Still Be In Pain
The pain moves around my hip and leg area, but still remains. Over the weekend I walked plenty, but did not engage in any other physical activity which should have agitated my body, so I’m back to Square One. I’ll have to investigate getting professional help when I return to Atlanta.

Don’t stare at the eclipse, I want you to be able to read this space tomorrow.