I’m slowing my roll today. Instead of rushing into the office I am lying in bed, under the covers to ward off the chill that has arrived inside the ITP Estate — I don’t dare even think about using the heat at this time of year — and considering breakfasting somewhere prior to blessing “XYZ Corp” with my presence. Unlike most other days I shan’t be leaving the office early either, which is why I have little concern to get in any time soon.

A Good Walk Foiled
My walk back to the M6 yesterday was glorious, even though not a single photograph was created during it. The weather couldn’t have been nicer as I strolled through Piedmont Park and down the Beltline. I even managed to go straight past The Albert without stopping this week. I had a bigger fish to fry! Well, metaphorically speaking at least.

I hoofed nearly 5k (that’s 3.1 miles) with the idea of walking past the M6 and heading for an early dinner at Fox Bros BBQ; I love Fox Bros’ food, but the parking has always been an issue for me. Most times I wind up parked far away on Elmira and having to walk back to the restaurant. I figured that if I could force myself to walk the extra quarter-mile and arrive on foot that I would have executed a perfect plan. However, in my world the perfect plan rarely gets executed; this time a revolt from my body as I marched up the final uphill before reaching the M6 ended my crusade. True, it was still early enough to find parking at Fox Bros, but by that time I decided that I probably shouldn’t gorge on a pile of barbecued meat.

Instead, I gorged on chips, salsa, and a burrito at Elmyriachi once I drove there. 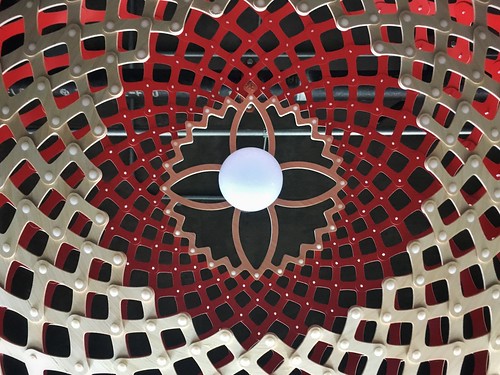 If I had better editing skills I’d love to clone out the conduit you can see peeking through the pattern made by this lamp. This is one of the many interesting design choices that I found inside the MB Dome the other day.

Stare deeply into the photo…
Stare deeper…
And deeper…

You Are Getting Sleepy…
There were still many hours in a normal adult’s evening when I arrived at home after eating dinner. All day I was champing at the bit to get home and do some development work and German homework. I was going to be productive!

And the I couldn’t keep my eyes open past 8:30pm last night.
I nearly slept through the entire night.
I am well on my way to being a real old person.
Get off my weeds!

Have a great Thursday everyone.

6 Responses to A Different Approach