Knocking out a quickie today because it’s going to be a jam-packed day, ahead of a non-normal week, for yours truly.

I spent most of the weekend avoiding real exercise, which is absolutely terrible for my expanding waistline, but good for my ailing body.

On Friday night Bonnie and I went to The Masquerade for our first indoor concert since late 2019. 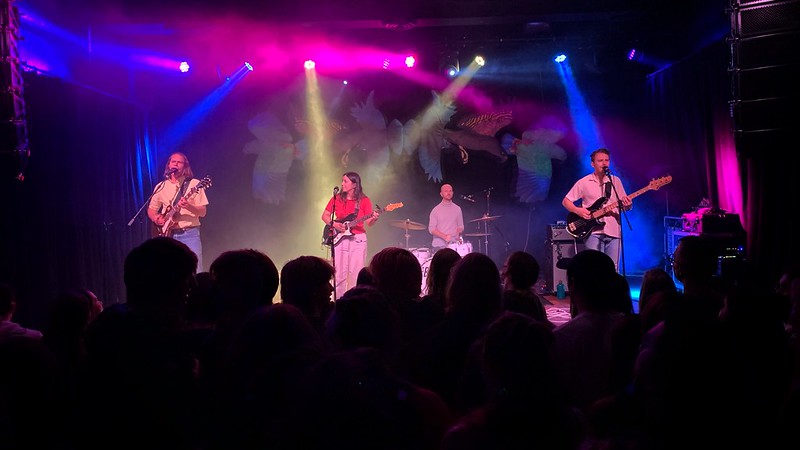 While not drinking beer we wore masks, but were in the minority.
COVID is gone, Mission Accomplished!

The show, which was headlined by The Beths, was fun. Bonnie and I saw the band perform in 2019 at The Earl.

After my Betsy and Bella walk I picked Bonnie up in the M6 and we went to a new Atlanta brewery. *mind blowing emoji* Yes, you read that right, there is another new brewery in town, Atlantucky Brewing, started by someone called “Nappy Roots”. The beer was good, and due to parking limitations (I didn’t want to feed more money into the virtual meter), we headed out after a couple of beers. From Atlantucky we went down to Lee&White where we had one more beer at Monday Night Garage. On Saturday night Bonnie baked us a frozen pizza. Yum!

Yesterday I opted out of riding Wheelhopper, in part to protect my body from further damage, and in part to do some much-needed choring. There is more choring to be done, but I managed to do some compost maintenance, trench digging with my new shovel, seed sowing, and harvesting. Harvesting? In February? Yes! I pulled in a large bin of greens — kale, spinach, bok choy, and lettuces — that I stir fried with red bell pepper and baked tofu. Served over rice and covered with a store-bought orange ginger sauce, the meal was delicious. I didn’t have to eat alone either, because I returned the favor of Saturday night’s cooking by feeding Bonnie last night.

My participation in tonight’s Moonlite Hash will be weather dependent. Regardless I shan’t be running today.

Hope that you had a wonderful weekend, and that you are feeling happy and well.