Those $770 tires (installed, balanced, and aligned) seem like a bargain when not hydroplaning on slick road surfaces. 🙂

Do You Like To Watch?
I joined Phil and Stacy at their house last evening to watch the finale of Big Brother 7. With little surprise Mike Boogie took the grand prize, which since he was often seen wearing Florida Gator attire, pleased me.

The only surprise to those of us watching was Mike’s announcement that the Dolce Group (his restaurant business) is opening three restaurant in Atlanta this Fall.

Sure enough, here is what the Dolce Group’s website has to say

Then, in the fall, The Dolce Group will move out of LA for the first time to open three venues in Midtown Atlanta’s new Atlantic Station development: Dolce, Geisha House, and a brand-new bowling lounge concept called Ten Pin Alley.

Updates And Upgrades
After returning home last night I clogged up my Internet tubes quite nicely by downloading the latest versions of iTunes and QuickTime (for both Windows and Mac) as well as getting the current Windows security updates (yesterday being “patch Tuesday” and all).

I’m not sure why I was so hell-bent on getting iTunes 7. Normally I am not an early adopter when it comes to software (because it usually contains bugs or breaks something else). So far iTunes 7 seems to be a good update. It appears that Apple has put a lot of time and effort into updating the visual appeal of the user interface without impacting the functionality too much. I will say that this morning it seemed to take an awfully long time to Sync (no longer called Update) my iPod. Of course that could have something to do with the fact that I also updated to the newest version of iPod software as well. There’s a reason it’s called the “bleeding” edge.

ITP non-Flickr Pic (This One Is Stolen From Someone Else)
I always say that the children are the future. In this picture you can see me teaching a young child the ins-and-outs of point-and-shoot photography (not pictured are the puppies I saved from a burning building, and the old man whose hearing I restored simply by touching his ears). 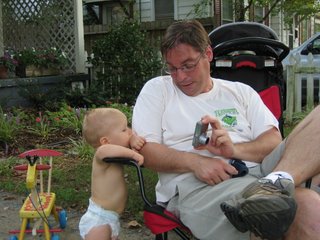 East Atlanta Deadbeat Dads Are Undefeated!
My fantasy league football team is 1-0-0 baby! Powered by Donte Stallworth, Eli Manning, the Seattle Defense, and the now-injured John Abraham (a draft pick I was oh so proud of), I beat my opponent 117.58 – 110.80.

Having said that, I would not be surprised if I don’t win another game all season.

No Running For Me Tonight
Tonight I’ll be at The Tabernacle watching the antics of The Flaming Lips. Oh sure, I could have seen them for free a few months ago in Atlanta, but I chose to wait until I could line the deep pockets of TicketBastard instead. Anyone else out there going to the show tonight?

And now for some ideas stolen from LiveJournal…
Current Mood – meh, I have a headache and am still not 100%
Current Music – Sirius Satellite Radio, Channel 26 playing Muse — “Knights Of Cydonia”
Website Of The Day – Ever wanted to create a slideshow using your Flickr photos? If so, surf on over to Flickrshow and generate the code necessary.
Exercise (b)Log – none