I’m on the trip that has taken me nearly twenty years to make and at points during the twelve hours of driving that I did yesterday I felt as if I started the trip twenty years ago.

To bore you again, when I was considering leaving Huntsville, Alabama in 1994 my two target cities, each sight-unseen mind you, were Atlanta and Austin. The city which won (can you guess?) was the one in which I landed a job first.

I was quite productive on my journey, listening to a bunch of podcasts as well as the entirety of James Gleick’s “Chaos” and finishing David Sedaris’ “Let’s Explore Diabetes With Owls”.

I’ve seen very little of the city thus far, exploring starts after coffee/blogging. I find the part of town in which my hotel is located to be very confusing, seriously I have gotten lost six times already, even with all of my technology at hand. Today’s destination will be a part of town the locals call “downtown”.

Today’s Daily Challenge
Share one way you save money on entertainment.

Saving money doesn’t have to mean staying in. If you know where to look, you can still have fun times that leave you fulfilled â€“ and your wallet still filled! By sharing your idea, you may inspire someone to explore a new money-saving way to have fun. And you may pick up a new idea yourself.

I could save money buy not buying concert/play tickets that I do not use.

Bad Jill. Bad Jill.
I may have to retire my Garmin (aka “Jill”) because her sense of direction is little better than my own. Google Maps told me how to get to Austin via interstate, Apple maps similarly, but Jill took me off the big roads and guided my through a more direct route which consisted of many speed traps and nearly a toll road.

I generally have no problem seeing the countryside on roads but when I am on a day-long journey I want as little stopping and going as possible. Oh, by the way, when I left that comment yesterday I was not driving per se I was sitting waiting for a train to pass.

Ooooph
Rough calculations show that the Jeep Liberty gets about 23 mpg on the highway. I never got the opportunity to contact Hertz yesterday, I will send them information today, but don’t see myself making the time to so an auto swap, if that’s even possible.

So far I have filled up in Tuscaloosa, AL, Rustin, LA, and somewhere in parts-unknown Texas. Rustin, a one time home of bands Neutral Milk Hotel and GASHCAT (I missed an opportunity to be wearing my GASHCAT t-shirt in Rustin) and home of Louisiana Tech, was also a lunch stop for me. The Po-Boy place that was recommended via Siri inquiries and Yelp followups, was no longer named what I was told. With no trunk and all of my belongings visible (no Barb, this rental does not have the shade installed) I wanted to eat somewhere fast. I wound up eating a burrito from a food truck, which was unfortunately bland and very messy.

One benefit of the Jeep Liberty in which I can be seen this week is that it has Texas license plates so I look like a local 😉 except for all of the confused driving I have been doing while lost. 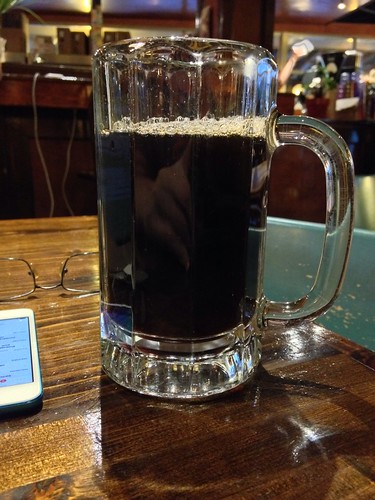 This is the (out of focus) coffee mug from which I am drinking this morning thanks to the good folks at Epoch Coffee.

I’m on my second mug (YEEEEEEHAAAAAAW!), now eating a rather disappointing bran muffin, while eavesdropping on the conversation of four young co-eds at the table next to me. It’s like a Benetton ad (yes I know, I’m old) with four females — two caucasian, one Asian, and one African-American — all very young and pretty.

Keeping Austin Weird
I walked to one of three walkable restaurants last night, a steak joint near the hotel, but was turned off my the fifteen minute wait (at 8pm CDT) and their meager beer selection. So I used the power of the iPhone and located a nearby (driving) barbecue / craft beer place called Stiles Switch BBQ & Brew at which I had the three meat plate (don’t judge, I’m on vacation) and a single (poorly poured) smoked porter. Not wanting to get a DUI in Texas (I believe that’s cause for capital punishment here) I inquired about buying beer locally to take back to the hotel.

“You have thirty minutes” I was told, “the package stores close at 9pm.” WTF? I was then assured that I could buy beer at gas stations and supermarkets.

Let’s be honest, how many gas stations do you know that sell quality beer (as an aside: QT does). To my astonishment, I could not find a fucking big-chain supermarket anywhere in the area in which I was driving aimlessly. My technology was of no help either as it constantly thwarted my inquiries for Whole Foods and the like. Do people in Austin just hunt and gather? Are they all Freegans?

Today’s Personal Project
See Austin, conference starts tomorrow and due to the length of travel scheduled for Sunday I won’t have much time to see the sights then.

Stats & Goals
Daily
Current Mood – okay, though I wish I had budgeted more “Paulie time” for this trip. It doesn’t help that I will have to hole myself up sometime today to write code as well.
Current Music – listening to the conversation and alt-rock here at the coffee shop.
Website Of The Day – As I do on any road trip, at one of my gas stops I looked for sodas I’ve never had before. Yesterday I found Big Red, which tasted like the cinnamon gum of my youth.
Mode Of Transportation To Work – n/a
Exercise (b)Log – nothing
Morning Weigh-In – on vacation