The trade show for which I have been laboring excessively is next week, thus today’s demo is the “final” revision (you know “final” never really means “final” when referring to software, right?). I’m not optimistic that the subsystems on which my software relies will be ready by this afternoon; regardless I am going to have to demo again.

Today’s Daily Challenge
Learn about the air quality conditions in your area by visiting www.airnow.gov.

The quality of the air outdoors makes a difference to the health of our hearts and lungs. Air pollution, caused by smog and small particles in the air, leads to poor air quality. Spending time outside on a day when air pollution is high can irritate your throat and eyes, make your chest feel tight, and cause you to cough. People with heart disease, lung disease (like asthma), or outdoor allergies are even more sensitive to poor air quality. If you’re planning outdoor activities, keep up with the air quality forecast, as it can change from day to day.

I’m going to guess that Atlanta’s air quality falls somewhere between “shitty” and “really shitty”. Mind you we could be in China, which is defining new categories for poor air quality daily.

Even though I wasn’t “feeling it” (something about giving a demo today…) I decided to have some fun last night. I started the evening by driving up to East Atlanta Village (even thinking I saw (former?) ITP-Reader Jenka at one point) and eating dinner at The Elder Tree where I ate and drank traditional Cinco de Mayo fare of a lamb sandwich (damn, I should’ve ordered the corned beef!) and drank a Wells Bombardier.

After dinner I moseyed across Flat Shoals to The EARL for the Dick Dale show. Unfortunately I had to stand through much of the opening act which was primarily a 1960s rock cover-band (they have their place, opening for Dick Dale is not where I’d place them) and then an extended delay before Dale took the stage around 10pm (good thing I napped before heading out). The show started with the crowd singing “Happy Birthday” to Dale (psssst, his birthday was May 4th) and him telling a few stories before starting to play his signature surf guitar rock. I stayed for about a half-dozen songs before “big frizzy hair” guy and “6’2″ tall, raise your arms over your head for entire songs” guy moved toward the stage and blocked the view for me as well as the stunning young woman I’d been eyeing the entire evening (pity she took no note of me). At that point I decided to peel toward the back of the room (side note: it’s not like you can’t hear Dale’s playing loudly from any spot within The EARL’s walls, I was even wearing ear plugs last night and heard the music well). It was about 11pm when my chariot started looking like a pumpkin, and since I wasn’t drinking and knew that there was no hope of chatting up the woman, I went home to watch Sunday’s “Mad Men” (before you lot could spoil it for me).

ITP Flickr Pic
“It’s Made Of People (Shot On High)” 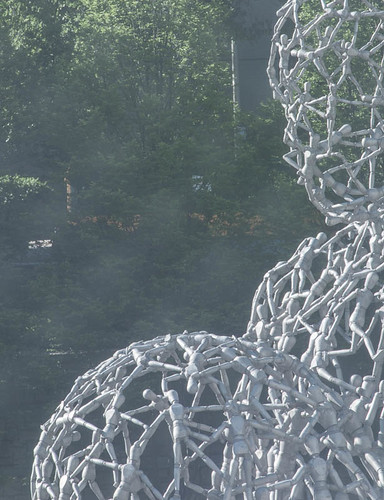 I’ve long since been an admirer of this statue, now (as in for at least a decade) located on the south side of the Woodruff Arts Center. On Saturday morning I decided to take a shot of this statue from a different perspective than I have previously. The only unfortunate thing about this shot is that I had to shoot through the south side’s permanent window shades, a series of small white circles that can be seen past with the human eye but cut the amount of light and heat drastically. These circles account for the blurriness of the shot.

Frusterating
That’s the way a guy I used to work with many years ago pronounced “frustrating”.

I was completely frustrated prior to going out last night because I tried to watch “Mad Men” on my iPad by streaming it from my iTunes library, both of which are communicating via an Apple AirPort Extreme router. After five minutes of attempting to “connect to my shared iTunes library” I got frustrated to the point of giving up.

You know me, I’m an “Apple” guy and am generally pleased with the way the company is going. That being said I’d love to see them dump a shitload of the shitloads of cash they have on hand toward employing kick-ass developers who can swiftly fix the annoying issues present in Apple’s “It Just Works!” infrastructure today. Shit, if I had the skills I would have sent them my resume last night.

Putting The ‘T’ In ENT
It may well be allergies or Atlanta’s poor air quality but I’ve been noticing a bothersome feeling in my throat recently, and periodically for about eight months. I may have even mentioned this previously on the blog. Every day it feels as if there is a constriction and it’s been driving me nuts lately. Today I’ll be making an appointment with an Ear/Nose/Throat (ENT) doctor to find out if one or more of these components is malfunctioning because I cannot live like this forever, and ignoring it may just kill me.

Stats & Goals
Daily
Current Mood – nervous about my demo, nervous about my health
Current Music – silence
Website Of The Day – AIRNow. It’s as if someone did all the hard work of finding the website today.
Mode Of Transportation To Work – my car
Exercise (b)Log – nothing
Morning Weigh-In – Arg, I keep failing to jump on the scale