Paid Up / Pain Up

You never realize how many services hold your credit card information until they try to charge one that has expired. This morning I have already updated billing information on two websites and charged over $300 to my card, and this was just for internet hosting. Yeeesh!

Today’s Daily Challenge
Plan to make your next outing focused on an activity that’s not related to food.

Dining out is often the default activity when we’re making plans or rewarding ourselves. But, the downtime can often come with a side of the high salt, sugar, and fat found on many restaurant and fast food menus. Explore alternatives to dining out for a fun outing where you’re not faced with tough food choices.

Is beer considered to be food? 😉

My Last Outing Wasn’t About Food, But The One Before That Was
I fought traffic yesterday afternoon and made my way to the Deck Mahal for a lovely pork dinner prepared by ITP-Reader Barb and her husband Allan. For my portion of the meal I arrived at the house with a twelve-pack of New Belgium beer, specifically their current “Folly Pack” offering.

Great food, beer, and entertaining conversation were not the only things on my agenda for last night. After dinner I made my way over to the west side of town. specifically Terminal West, for the The Ghost of a Saber Tooth Tiger show; as I mentioned yesterday this is Sean Ono-Lennon’s band. I arrived while the opener, a band called “Bronco” played and was grateful for the complimentary ear plugs offered by Terminal West. It’s not that Bronco was bad, it was that they were over-the-top LOUD. Lennon’s band took the stage a little after 10pm and played an amazing set of music. If I were stoned this would have been one of my top-five concerts. But I wasn’t stoned, and I decided that I didn’t need any more alcohol after leave Barb’s and Allan’s, so my opinion comes from a fairly sober state. My only complaint for the evening was that The Ghost of a Saber Tooth Tiger didn’t play long enough. The band finished their first set shortly before 11:00pm and came back our for a one/two song encore, and that was it. I was home by 11:30pm, which given my current frenetic lifestyle was probably the best thing for me.

Interesting side note: The Ghost of a Saber Tooth Tiger is really a duet backed by other musicians. The second half of the duet is the strikingly beautiful Kemp Muhl, who was born in Atlanta. Prior to teaching herself how to play the bass Muhl was a successful model. Oh, she is also Sean Ono-Lennon’s girlfriend, or should I say that Sean Ono-Lennon is Kemp Muhl’s boyfriend? 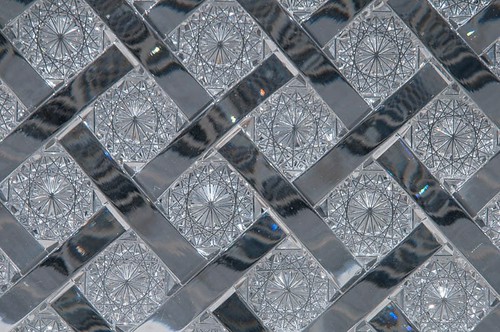 I’m not sure how long it took someone to make these intricate cuts into glass. It took me 1/200 of a second to take a (slightly askew) photo of it.

Looks As If It’s Going To Be An Expensive Trip
I’m about 10,000 SkyMiles short for booking travel to Brussels. According to Delta’s website it’ll cost me $350 to purchase the miles needed to cover my needs. If I’m going to spend $350 just for SkyMiles, I might as well spend the $1650 for the full fare and use the 119K miles for a domestic trip of my choice later this year. If I purchase the airline ticket straight out this vacation will easily cost me $4000, so in the grand scheme of things $1650 is not that big of a deal. Or, I could just say “Fuck Europe!” and not go…

To Mow Tonight, Or Not Mow Tonight? That Is The Question
While I thought I had all my chores mapped out I realize now that I:

My grass is not that tall yet, but I’m skipping town tomorrow and rain plus warm weather are predicted, which always spurs grass growth. Besides, my neighbors are doing a good job of keeping their lawns in check, and there is now a house for sale on the street so I’d like to keep up appearances.

If for some reason I don’t get out and mow tonight there will be the opportunity to mow tomorrow morning before departing for North Carolina. What time do you feel is the earliest one should crank up a gas-powered lawn mower in a city residential neighborhood?

Today’s Personal Project
Attain internal peace and if I can’t do that, pack the car for my trip.

Stats & Goals
Daily
Current Mood – looking forward to skipping town tomorrow.
Current Music – silence at the moment
Website Of The Day – I did not know that the Taj Mahal had a website. I’m sure it’s nice but unfortunately it is Flash-based so I can’t use it.
Mode Of Transportation To Work – my car
Exercise (b)Log – nothing
Morning Weigh-In – Arg, I keep forgetting to jump on the scale