While at Terminal West last night I pulled out my iPhone, as you do, and took a peek at my calendar. Wasn’t I surprised to see that I already have something planned for at least one of the two days for every weekend between now and August. So much for an impromptu getaway to the mountains, or camping, or whatever. Admittedly most of the planned activities could be skipped, with the exception of those weekends in July when I’ll be away, but still.

Your grocery bill can serve as a visual reminder of what’s inside in your refrigerator and pantry. When you’re aware of the produce and other groceries in your kitchen, you can save money by cooking and eating what you have on hand instead of buying prepared foods or take-out. Using food soon after it’s purchased also helps avoid waste and clutter from forgotten or expired items.

This would be easy for me to do this week as I just went to Kroger the other night. For other weeks this may be an impossible tasks because I visit the grocery store so infrequently these days.

Ugh, A Third Act?
After waiting out traffic, waiting to pay my $5 to park at King Plow, and then getting inside Terminal West for the show I needed a beer. I bought a beer from the bar and rather than standing around inside I headed to the smoker’s deck upstairs and to the back. To my knowledge I’d never been to Terminal West when it stays light later, so I snapped a few photos of the areas surrounding it.

While outside I heard a singer/guitarist take the stage and start to play. I knew that the opening act was Lydia Loveless so I assumed this guy was a late addition to the bill. “Ugh, a third act? I won’t get home until very late tonight now.” I thought. After a few songs I went back inside only to realize that the singer/guitarist was none other than Rhett Miller, lead singer of the Old 97s. Turns out that Lydia Lovelace couldn’t make it to the show so Miller was putting on a bonus acoustic set to fill that time slot.

Even though I know very few Old 97s songs I’ve gone to see them in concert at least three times now. The band is very entertaining and really puts their hearts into their sets. It also doesn’t hurt that Miller’s handsomeness draws out many an attractive young lady as well — not that I was able to parlay that into anything. 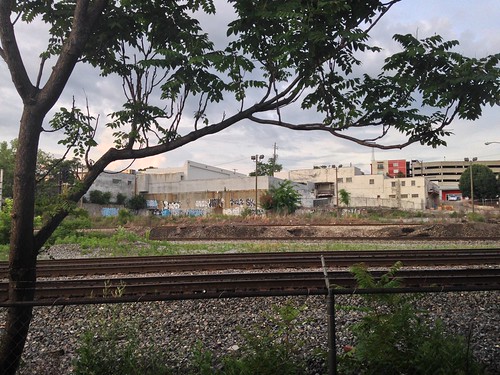 (does this shot look a little crooked to you?)
Taken from the back porch of Terminal West. In the distance you can see the apartment building in which my friend Maigh used to live. Once while I was visiting I met her neighbor Meg, a strikingly beautiful young woman who in long hindsight may have been interested in dating me but I was too dense to pick up on this.

A Different Kind Of Concert Tonight
Tonight I’ll have to wait out traffic (because I didn’t want to deal with MARTA with a threat of rain) before heading into downtown to go to the Tabernacle for the Manchester Orchestra show. Unlike last night’s show I will know most of the songs Manchester Orchestra performs because I’ve been a real fan of theirs for a long time.

If the band name “Manchester Orchestra” seems familiar it may have something to do with the facts that they are from Atlanta and I have been writing about them since seeing them open for two other bands at Smith’s Olde Bar on March 7th, 2006.

Here’s what I wrote then:

Manchester Orchestra : I liked their set enough to buy their EP at the show. That should indicate how much I enjoyed myself. The band was tight and into their set. I kept watching the lead singer rolls his eyes to the back of his head as if he was going to go into convulsions. Their set ended with a really nice song that could fit into a Bright Eyes CD without notice; that might be my only critism, we already have a Conor Oberst.

What a pompous ass I was back then. 😉

side note: As I was looking for that initial post I started looking at the names of the people who used to read this blog and leave comments. I’ve scared away quite a few apparently.

A Busy Weekend Ahead
You already know about my plan to hear music again tonight.

Tomorrow I will be on the ball from the get-go. I have a ton of cleaning to do around the house, ITP-Reader Martha’s new abode to visit, and if the weather holds I may even try and sneak over to the Candler Park Music Festival to hear Trombone Shorty and his band perform. For either financial or time reasons I’ve been unable to this band perform again since my first time seeing them at Variety Playhouse back in 2011.

Today’s Personal Project
Wait out traffic tonight by doing something other than going to a bar and drinking.

Stats & Goals
Daily
Current Mood – okay, minor aches and pains keeping me from being much better
Current Music – silence at the moment
Website Of The Day – I almost wish that I were an independent contractor so that I could use co-working spaces like Opportunity Hub, Roam, or Strongbox West.
Mode Of Transportation To Work – my car
Exercise (b)Log – nothing
Morning Weigh-In – 216 pounds (2014-05-30)

14 Responses to Booked Up