We have moved into the final month of the first half of 2014. Already? Okay then, let’s do this!

Reaching for those feet increases flexibility! You’ll likely feel the stretch in your lower back and along the backs of your legs. The benefits of flexibility include better joint health and circulation. Being flexible also leads to an increased range of motion, which helps you as you carry out everyday activities.

Hooray, something I do already!

My Last Concert At The Tabernacle?
As I wrote Friday I am a huge fan of Manchester Orchestra. However, if they keep playing The Tabernacle I might not ever see them in concert again.

I’ve long been a hater of TicketMaster, who is the sole online ticket provider of The Tabernacle. I forget how much they gouged me for this show, but I’m sure it was more than I wanted to pay.

Upon arriving later than I expected I decided to pay $10 for parking because there was an attendant. I hate those credit card machines, and have always hated the cash boxes since I erroneously received a parking ticket in 1995 while working at BellSouth, so I pay extra when there is a uniformed human working the parking lot.

Inside The Tabernacle I walked around a bit and decided to buy a beer. I think the cheapest beer available cost $8, and the 24-ounce Sweetwater Motor Boat that I bought took $11 (plus $1 tip) out of my wallet. As I think about this I realize that I should be just as angry at any bar/restaurant that charges me $5.50 (or more!) for a bottle/can of beer.

Since I cannot control the prices of any of the above I think my only option is to speak with my wallet and not return. 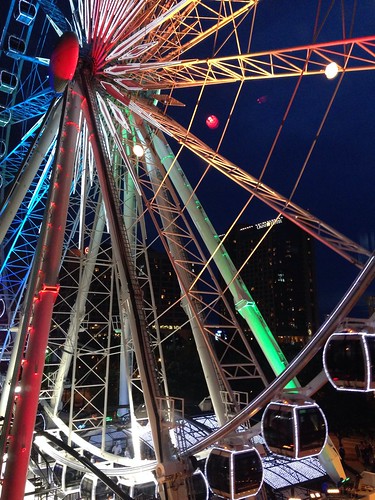 The wheel in the sky keeps on turning. I took this shot from The Tabernacle on Friday night.

Clean, The Cleanest I’ve Been
On Saturday morning I finally started the task of making my basement a livable space again (it’s at least five degrees cooler than upstairs in the summer, so it is to my benefit to do so). If you’ve ever been in my basement (think back, it’s probably been awhile) you might recall that there are essentially two halves, the bar half, and the game room half. I tackled the bar half.

A lot has transpired since I once frequented the basement, I tore apart (read “made a mess”) the game room closet because I discovered a water leak, a new water heater was installed and during that process the plumber and I tore open some of the wall paneling to search for plumbing components that my house apparently didn’t have, I removed many of the aging ceiling tiles, poked around the space between the suspended ceiling and the framework and discovered many bugs that I killed.

I moved most of the furniture from the bar half to the game room half so that I could vacuum. Let me tell you, 40+ year-old shag carpeting is a bitch to vacuum, but when it’s done it can look okay. I put away all of the camping gear that didn’t get put away when I returned from LEAF. I made critical decisions about things I should keep and things I should not. By 2pm I was pooped. My treat for the day was to watch two of the three season three Sherlock episodes that I’ve had recorded since they aired.

The plan was to tackle the game room side of the basement on Sunday, but you’ll read what interrupted that plan shortly.

I Barely Recognized The Place
It was good to recognize so many friends in a space that I did not recognize at all, ITP-Martha’s newly-renovated house. The space is brilliant. I arrived with the rain on Saturday afternoon knowing well that I was not going to venture up to Candler Park to hear music. Instead, it was my intention to eat some food, drink some beer, and chew the fat with some of the people with whom I used to run. It was also great to see many of the active ITP Readers in real life as well.

I had a lovely time at Martha’s party and was determined not to be the last one to leave (a bad habit I used to have), so when I started seeing the number of people remaining dwindle I decided to head home.

I suppose that my long day of cleaning, carousing, and drinking got the better of me because I doubt that I remained awake for more than thirty minutes when I arrived home.

The Wheels On The Ground Keep On Turning
At Laura’s housewarming party ITP-Reader Barb posed “You want to go for a bike ride tomorrow?” Having spent minutes of my life pumping up my bike tires earlier in the day how could I not say “Yes.”? So I did.

I met up with Barb and Allan at their not-so-secret lair and we headed out for what wound up being a nearly thirty-three mile ride. Most of my body is suffering in a good way today, those portions that meet the hard bike saddle on the other hand…

After riding Barb and Allan served up an excellent lunch of burgers and hot dogs. As we sat outside on the Deck Mahal I drank a beer and recalled how rewarding it is to drink a cold beer after a long (for me) ride.

My day of accomplishment was not over, however! I returned home and before I could sit down and relax I motivated myself to put the new blade on the mower and cut the grass. I did!

After another shower of the day I boiled some eggs (my dinner) and watched the final episode of Sherlock.

Good weekend all around.

Happy Apple WWDC Keynote Day!
In the year of a Apple fanboy/developer few days are as special as today, the day when Apple opens its World Wide Developers Conference with a keynote speech laying out their projected roadmap for the remainder of the year.

I’m not going to say that come 10:00 PDT my attention to work might be lost, because saying so could get me fired. Perhaps I could defend it as “research”.

Today’s Personal Project
Stretch the legs a bit by playing some racquetball tonight.

Stats & Goals
Daily
Current Mood – okay, still wishing my throat problems would abate.
Current Music – silence at the moment
Website Of The Day – You are probably not like a nerd like I am, writing an sample application that requires a website that can generate randoms numbers, strings, etc. But if you are, you may be interested in Random.org, which is fantastically simple to use.
Mode Of Transportation To Work – my car
Exercise (b)Log – Sunday = cycling, ~33 miles
Morning Weigh-In – 216 pounds (2014-06-01)