Not Much Going On

Not a whole lot going on in my life other than an overwhelming fear of impending doom. I’m sure I’ll get over it.

I’m a little annoyed at myself today because I wanted to wake up super-early so that I could go out for a pre-work walk. Instead I stayed in bed until my normal time and skipped the walk.

Today’s Daily Challenge
Read about when to get medical care in the case of an illness or injury.

Recognizing the signs of an emergency for yourself or someone else who is sick or injured can help you choose when and where to seek care. For some conditions, such as stroke, treatments are more successful the sooner they are administered. In those cases, it’s important to get immediate medical care. Other illnesses, like flu or tetanus, need to be treated promptly, but you may be able to save time and money by seeing a doctor at an urgent care clinic.

Pre-Play
I wanted to make sure that I allowed myself sufficient time to deal with Atlanta’s traffic problems for my journey from Perimeter Mall to Little Five Points, so I left the office at 4:00pm. The play didn’t start until 8:00pm, so I figured a four-hour buffer was sufficient. Traffic was bad, but not horrible so it took me “only” a little more than an hour to make the journey.

With time to kill I did what I do best, I headed to a bar. I walked from Horizon Theatre up to Wrecking Bar Brewpub figuring that I’d beat the crowd and that the Wrecking Bar’s basement atmosphere would be cool; I was correct on both points. Had I thought of it at the time I should have also realized that the Wrecking Bar’s lack of televisions would also keep away those having World Cup fever.

At Wrecking Bar I had three “shorties” (8-ounce half-beers) and an appetizer of picked vegetables, pimento cheese, and bread points. The beers were predictably delicious and the food had an unexpected punch of spiciness. The food actually had two unexpected punches, the second one came from what I incorrectly identified a small, red, sphere as a tiny tomato but found out differently when I bit into it and discovered an extremely hard stone/pit; I’m glad that I didn’t accidentally break a tooth.

After consuming my fair share I wandered back to the old Moreland School that houses Horizon Theatre and meandered about looking for iPhone photo opportunities until the theatre’s doors opened. 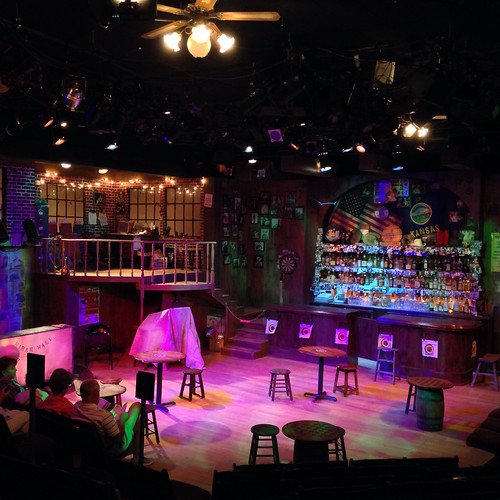 I was tying to get an HDR photo using my iPhone before “Cowgirls” at the Horizon Theatre started. However, it appears as if I accidentally switched the stock Camera app into square format while doing so. Dangen.

Play
When I bought my ticket to “Cowgirls” I knew nothing of the play. It was only yesterday that I discovered that it was a musical filled with classical and country music performed by an all-female cast.

“Cowgirls” is a play based in a honky-tonk bar in Kansas that has hit financial straits. Through a bit of barely-explained communication breakdown the owner of the bar hires “The Coghill Trio” instead of a “Cowgirl Trio”. Though the owner, and the two female performers who also dream of taking the Hiram Hall’s stage try to convince the three classically-trained musicians to skedaddle, the trio remains and learns what it’s like to perform country music.

The nearly two hour performance was quite enjoyable with most of the women singing and playing instruments very well. Unfortunately (for you) this play closes Sunday otherwise I’d advise you to go see it.

Post-Play
It was 10:30pm when I finally arrived home last night. No time for cleaning. No time for television watching. Instead it was straight to bed.

For My Next Trick…
Tonight I will be attending a get-together at Red Brick Brewery hosted by the software company Atlassian. Atlassian makes developer tools such as SourceTree (source control) and Jira (problem tracking) that I use as part of my paying gig on a daily basis.

As I understand it the get-together is to talk about (give a sales pitch?) some of their developer tools. But hey, the get-together is being held at a brewery so it shouldn’t be too painful, right? 🙂 If my “APIs and IPAs” t-shirt that I got last year wasn’t so tight (a me problem probably) I would have worn it to the get-together tonight.

I’m not-so-secretly hoping that there is no food at this event (I can’t pass up free beer or food) so that I can try going to Bocoado, a bar/restaurant recommended to me by my old friend Sother.

Today’s Personal Project
Force myself not to stay out late.

Stats & Goals
Daily
Current Mood – a little annoyed
Current Music – silence at the moment
Website Of The Day – Yesterday I was informed about Calm, a wonderfully simple website that helps you to relax.
Mode Of Transportation To Work – my car
Exercise (b)Log – nothing
Morning Weigh-In – 217 pounds (2014-06-14)

6 Responses to Not Much Going On