Okay Universe, You Got Me

Your minds may not be blown the way mine was last night, but here’s my story.

Hopscotch turns an exercise into playtime. Besides boosting your flexibility and balance, hopscotch may be a way to find fun in improving your fitness. Having fun during a workout can change the way you feel about exercise. According to a recent study, you may also choose healthier foods after exercising if you found it more exhilarating than exhausting.

In a New York Times crossword puzzle that I attempted recently the clue was “What ‘hopscotch’ is called in New York” (or close to that). This confused me because I grew up in New York and we called the game ‘hopscotch’ ‘hopscotch’.

On Wednesday Night
As I was driving home from the play on Wednesday night I started to think about my “old days” back when I did Spinning twice a week and step aerobics three times a week at Jeanne’s Body Tech. I spend a lot of time alone so reminiscing about better times is a frequent occurrence. I started thinking about the step classes and specifically a woman that used to be a regular as well. You may correctly assume that I thought that she was attractive, but she was married and barely gave me the time of day, never mind any indication that she liked me. Coincidentally I also interacted occasionally with this woman professionally because she was friends with one of the founders of the company for which I was working at the time. Why I started thinking about her again on Wednesday night made no sense, but a lot of things in my life make no sense. 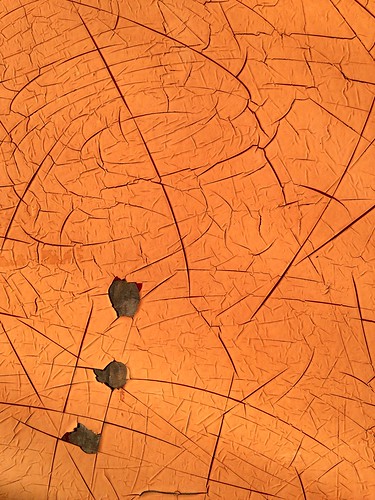 As I stared at this paint on an old elementary school door I couldn’t help but think that it must feel as if it has seen better days.

Nerds Unite! Holy Shit, Are They Models?
Yesterday I went to Red Brick Brewing for the Atlassian “Get Git Right” presentation. Had the temperature inside the brewery not be hovering somewhere in the 80s and the AV system used loud enough to allow me to clearly hear the presenters as I sat in the back (side note: For a developer event the participants were amazingly punctual. I was one of the last 25% to arrive.) I may have had a chance of learning something. It also didn’t help that a single (but married) beautiful young woman who slightly resembled the woman who I was thinking about the night before was in my periphery and my eyes wandered from the presentation to her often.

With the presentation wrapped up the boss and I went into the air conditioned tasting room and sat next to a table of six stunning young ladies, dressed to the nines, with one guy. I’ll assume the guy was a eunuch for he did not seem to be interested in any of them. But I digress…

I find it odd that on most Wednesday Thursday nights Red Brick hosts Team Trivia. The table of “models” signed up to play, and I considered signing up as well because I cannot fathom a Universe that blesses people with such good looks and trivial knowledge. But since the boss and I weren’t planning on making a night of Red Brick we did not join in; naturally we tried to answer questions as they were being asked. I only broke down and gave the table of models one answer because I assumed that most of the guy teams would know it.

In which sport is the “Lady Bing” trophy for sportsmanship awarded?

Before reading out the answer the emcee said “Only one team got this question right, and they were giving the answer by another person.” I was so proud, but slightly ashamed as well. 😉 Have I mentioned I was drinking beer?

The emcee was also a bit angered by the blatant use of cell phones at tables playing Team Trivia. I can sort of understand because you have to then assume that teams are cheating. However in this day and age we are addicted to our phones and cannot conceive of not using it for the duration of a sedentary event such as Team Trivia.

Oh, the answer is “Hockey”.

Sother Teague, Alton Brown, And The Universe
Nearly a couple of months ago I mentioned my old friend Sother being interviewed by Alton Brown (who have been friends for a long time) and reconnected with Sother on Twitter because of this.

One day on Twitter I posted a question about where in Atlanta I should go eat and Sother recommended Bocado because one of his New York compadres now works there (I met him last night and it turns out that he manages the joint.)

There was free food at the nerdy get-together, and it actually smelled quite good, but I was not far from Bocado, wanted to try their food, and was hoping to meet Sother’s friend (and perhaps get something comped for having a common ally — I did not) so the boss and I went to Bocado.

I don’t believe that I’ve mentioned that my boss was on a sales call with a young woman the last week and she mentioned to him that her favorite hamburger in Atlanta is the one made a Bocado. He mentioned this to me and I thought “Bocado” why does that ring a bell?

As I returned from the restroom I crossed paths with the woman I was thinking about on Wednesday night! I spoke her name and she turned around to me.

I should now mention the only sad part of the story. This woman had no idea who I was. I’m sure this disappointment showed in my face. 🙁 Have I mentioned I was drinking beer?

The burger and fries were really good, but not my favorite in Atlanta. The small plate mixed salad with beets, radish, pumpkin seeds, some other fruit whose name escapes me, blood orange, and a soft cheese I’d never previously eaten was delicious.

Whoa, Good Thing I Didn’t Ride MARTA
Because I am heading to Decatur tonight I considered taking MARTA to work. It was only the threat of afternoon rain that changed my mind. I am so glad that I didn’t choose to ride MARTA because as I was driving in I remembered that I have a followup appointment with the ENT today at 9:45am. Technically I could walk to the doctor’s office, which is about a mile or so from my office, but I am glad that I do not have to do so.

I’m not looking forward to having a scope shoved down my nose again, nor will I not be thrilled to report to him that the medication prescribed hasn’t worked miracles.

Today’s Personal Project
Meet up with my old friend Mike for a few drinks in Decatur.

Stats & Goals
Daily
Current Mood – nervous
Current Music – silence at the moment
Website Of The Day – While wandering the same halls that provided today’s photo I was also reintroduced to Radio Free Georgia.
Mode Of Transportation To Work – my car
Exercise (b)Log – nothing
Morning Weigh-In – 217 pounds (2014-06-14)

17 Responses to Okay Universe, You Got Me