Once again I have brought in a crockpot’s worth of food to share, toady’s feast is (fairly expensive at $3.49/lb) pork. This pork has been cooking since midnight and will be ready to serve at noon — just in time for the non-existent World Cup game today. Luckily I woke up around 11:30pm after an unplanned early sleep so that I could start the cooking at midnight.

Fresh, frozen, or leftover vegetables can easily find their way into your morning meal. Leafy greens and other produce are high in fiber, which keeps you alert until lunch time. Eating a high-fiber breakfast can also help prevent insulin resistance, a condition related to how your body converts food into energy and a precursor to type 2 diabetes.

I Went, I Saw, I Was Unaffected
I was fortunate enough to know someone who was saving a table at Taco Mac so I could saunter over shortly before the Belgium v. USA soccer game to watch. Taco Mac was packed with people there to watch the game; don’t these people have jobs?

As the game went on our table picked up coworkers, friends, and strangers and we all watched the US go down in defeat. I managed to limit myself to three beers, but was stunned to find out that my 11-ounce beer that I got first was $8.50! I need a cheaper hobby, maybe I should take up horse ownership, flying, or boat purchasing.

I know many (more than I expected) people were completely gutted by this loss. The loss didn’t hit me hard, I can now identify myself as an American in Belgium and Germany and follow it with “You know, like the kind you beat in the World Cup this year.”

After the US’ defeat I could have stayed at Taco Mac and watch my Mets go down in defeat to the Braves (it’s inevitable these days) but I am not that much of a masochist, so I went home. 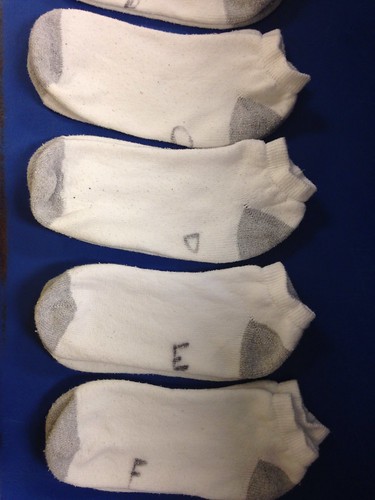 Yes, my socks are labeled. This is a technique I stole from a long-lost friend who convinced me that it is much easier to pair look-alike socks after doing laundry if you mark them in such a way to identify them as a set. I’ve chosen letters.

Makes me look like an indispensable partner now, doesn’t it ladies?

I’d Forget My Head If It Weren’t Attached
On my drive home I decided to eat dinner at Tomatillos because I haven’t been there in a while and I know it’s one place I don’t feel funny not ordering a beer with food.

While eating my brisket burrito it struck me that I had promised to cook for lunch today but had forgotten to go to a grocery store to buy the things I needed to do so.

I finished up my dinner and then drove over to the East Lake Publix keeping my fingers crossed that they’d have an appropriately-sized chunk of pork butt. Thankfully they did, but at a higher price (mentioned above) than I had hoped.

This Publix confuses me. My life in the ‘hood predates it by a few years. I remember going to the old Goodwill (though never that janky package store that was next to it) and watching them build the Publix. For some reason I rarely seem to shop at this Publix unless it’s a last-minute need and I don’t feel like fighting the traffic heading in either direction on Moreland. However the last few times I’ve been in this Publix the clientele has been different, in a way that interests me. Pity I am unable, or perhaps unwilling, to cook more at home, thus forcing me to do more grocery shopping.

Stats & Goals
Daily
Current Mood – overwhelmed
Current Music – silence at the moment
Website Of The Day – So much to learn in so little time (because I procrastinated). Today I’ll be trying to understand how RailEurope works.
Mode Of Transportation To Work – my car
Exercise (b)Log – nothing
Morning Weigh-In – 217 pounds (2014-06-14)

June Goals
– be prepared for, and have fun on my European vacation

11 Responses to The Lunch Man Cometh