For The First Time Ever

New and used, it’s how I roll.

Today’s Daily Challenge
Sit with your hands behind your head and bend side to side from your waist ten times.

If you’ve been sitting for awhile and need an energy boost, this move will raise your heart rate and stretch out your back and shoulders. When you sit for long periods, tension builds from being in the same position. Stretching can relieve the tension and make you feel more awake.

Stretching, what a concept.

Not For The First Time Ever: Lavanderia y Cena
Let me start off by saying that I am once again loving “School’s Out” traffic. It’s an amazing feeling to get on roads knowing that it’s not going to take at least twice as long as it should to get from points A to B.

Last night I zipped down to Chamblee (more on this in a minute) to go to my regular lavanderia. The laundry process was almost completely unexciting, save the woman who refused to use lower dryers and used two of the three upper dryers that I was getting ready to fill. Seriously, if this woman and her friend had fewer than twelve dryers, all upper, in use at the same time I’d be shocked.

During my drying cycle I hoofed up the street to stop into El Pollo NorteÃ±o (Yelp page) for some chicken. The food is not stellar but there is something about this restaurant that I like a lot. After eating I hustled back to the lavanderia to make sure that the seÃ±orita didn’t accidentally take my clothes from the one upper dryer she didn’t get to use. All was good.

For The First Time In A Long Time: Double Flashing Headlights
Thanks to the lack of traffic I was actually able to drive at or above the speed limit on local roads last night. Let’s all admit we don’t routinely follow posted speed limits, especially if you have little idea what that limit is on certain streets.

As I was cruising along, probably five miles above the posted speed limit, the driver of the car approaching me flashed the headlights twice. In the olden days this maneuver was done to alert you of a policemen ahead, but I have not seen this practiced in many years. Lo and behold I read the signal correctly, reduced my speed to nearer the limit, and had no problem when I turned the bend in the road and saw a Brookhaven police car sitting on the side of the road. In the name of karma after I was safely out of view I performed the double-flash to a driver headed into the area I’d just cleared. 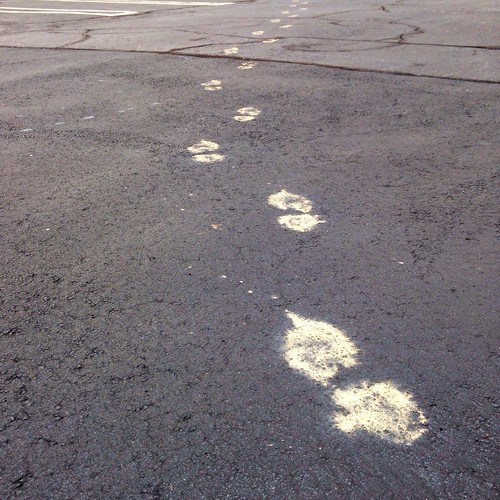 We often see this shot as footprints in snow. So while I was out on a walk after this afternoon’s rain I was stricken with delight to see these muddy bootprints on the asphalt.

For The First Time Ever: MasterChef
After getting home and putting away most of my newly-washed clothes I allowed myself a little downtime by watching the newly-recorded MasterChef. This series is not even good enough for me to call it a “train wreck” but for some reason I’ve been coming back week after week. There are so many things I should be watching instead of this, I think that I need to get my head checked. 🙂

The one interesting thing that occurred on last night’s show (WARNING: SPOILER AHEAD) was that the guy kicked off was dismissed because he inadvertently took someone else’s food out of the freezer and presented it as his own.

For The First Time Ever: One Single Goal
This month, when I’ll be embarking on my first European trip ever (I should probably start making hard plans), I’ve decided that I need but one goal.

Be prepared for, and have fun on my European vacation.

This may be the last time that I get to travel to Europe, I want to do it right.

Today’s Personal Project
Thoroughly read the email sent to me by a coworker outlining his trip to Germany a few years ago.

Stats & Goals
Daily
Current Mood – okay, but need to get a lot of work accomplished today, which will be made more difficult by the afternoon plans I have in place
Current Music – Listening to The Call’s “Let The Day Begin” album from 1989, not via Spotify, via my iTunes collection. I find it difficult to swallow that I’ve been listening to this album for twenty-five years.
Website Of The Day – Yes Virginia, The Wood Database really does exist.
Mode Of Transportation To Work – my car
Exercise (b)Log – nothing
Morning Weigh-In – 217 pounds (2014-06-14)

July Goals
– be prepared for, and have fun on my European vacation

12 Responses to For The First Time Ever