If you associated today’s title with the old movie “Escape From New York” (which was once New Amsterdam) then give yourself bonus points.

Germany > Netherlands
So far I have been less impressed with Amsterdam than any of the three German towns I visited. Maybe Amsterdam is not for the solo traveler, especially one who is not interested in the seedy underbelly that this city is know to have?

The cost of room, food, Coke, beer, etc in Amsterdam being noticeably higher than their counterparts in Germany have not helped my opinion either.

Would I return? Perhaps, but never as a solo traveler. 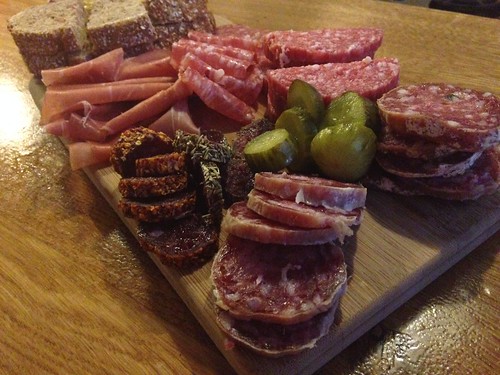 My opinion of Amsterdam’s food was that it was not that impressive and was overpriced. Then I had this plate of sausages with bread, pickles, and mustard for 8.50â‚¬. Maybe it was because I had four beers by the time it arrived, but damn it was good. I savored each and every bite of sausage in a way that I rarely do when I eat.

Maybe It’s The Eyeglasses?
While walking through the streets a pretty young woman approached me â€” not what you are thinking. 😉 She came right up to me (this rarely happens in my life) and started talking to me in a language I could only imagine was Dutch because it wasn’t German and it certainly wasn’t English. After she stopped talking I asked her to repeat what she had said, but this time in English.

“Do you live around here?”

When I told her that I was not a local her face immediately changed to the “you are of no use to me” expression that I normally see on pretty faces.

“Oh, never mind then.” she said

And she turned and walked away.

Maybe I just have a “I belong here” face because for years people used to ask me for help no matter In what store I was shopping.

Rijksmuseum FTW
After wandering around for more meters than necessary (I continually got turned around yesterday, yet another reason not to recruit me as an Amazing Race partner) I finally made it to the Rijksmuseum.

The museum was very crowded (with many people fighting to take photos of the artwork, a habit I just don’t get) but for someone like me who loves the Dutch Masters work it was amazing.

On my journey from the hotel to the Rijksmuseum I also passed the Van Gogh museum, as well as the Heineken Experience, but by the time I was done with the Rijksmuseum I wanted to take a more direct route back to the city center.

And Then It Happened… Again
As I was making my way back to the city center I decided I wanted to return to the bar at which I found the hash the day before. Not having any idea of the name or the bar, or on what street it sits, I tried to pick up the trail from Tuesday so that I could follow it to the bar.

As I was following trail I heard “FALSE TRAIL” and looked up to see the hash running my way.

“Fuck, I am on a new trail and not yesterday’s trail” I thought.

I caught up with the hash and walked with the DFLs a bit and was going to have a drink with them at their next beer stop. One of the hashers told me that they were doing a canal hash and this was a run before they jumped onto boats. At that time the hash entered a building that looked nothing like a bar so I veered off to walk solo again.

It appears that I have a knack for finding trail.

Once separated from the hash again I returned to my hotel to take care of a few things including looking up the Dutch word for “brewery” and locating the bar that I was originally seeking on a map. And that’s how I was able to have such an amazing meal last night.

I Am A First-Class Citizen
I had no intention of buying a first-class train ticket to Brussels when walked into the train station yesterday, and I had no intention to leave Amsterdam as early as a 9:30am either. But in order to secure a ticket (and if I have learned anything about European trains is that they cannot be trusted) I had to fork over the cash for a first-class ticket departing at 9:30am.

16 Responses to Escape From Amsterdam