So The Fog Was A Cold?

Whatever started yesterday was more than the damage caused by three beers the night before. I was so tired last night that by the time I got home after eating dinner I watched my recorded MasterChef episode and then passed out on the couch. When I woke an hour later I migrated into the bedroom and repeated passed out again. I really didn’t want to get out of bed this morning because something is clearly working on me today. I am hoping that whatever this is abates by this afternoon because tonight and all day tomorrow I will be attending Plywood Presents, you’ll have to click the link because I really can’t explain it, at the Fox Theater.

Today’s Daily Challenge
Lean your back against a wall, lift your toes toward your shins, and hold for a count of five.

If you’ve ever felt soreness in your shins, the culprit could be your tibialis anterior, the muscle in the front, lower part of your leg. In this move, you’ll strengthen the tibialis anterior. Keeping this muscle strong helps you move on uneven ground, kick a ball, and walk without stumbling.

Now this could be quite beneficial for someone who has recently experience shin splints.

ITP Flickr Pic
“Anyone Get The Number Of That Bus?” (Amsterdam, Netherlands) 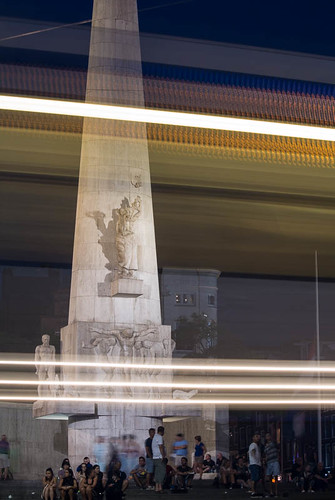 Potentially the final shot from Europe that I will post. This was a happy occurrence when I tried to shoot a long exposure of the people sitting in front of that monument and a street car passed by.

A Long, Slow Dinner
Anyone who has eaten in my presence knows that I am a notoriously fast eater. I know, I should slow down and savor my food, because it will help me eat less. I try, but my fast eating is apparently an unconscious habit.

Last night I was forced to slow down. On my way one I had a hankering for spicy Chinese food so I stopped into the “Chinese Food Court” in Chamblee and ordered a dish of spicy fish and tofu. I picked a table and ate a bowl of sweet and sour soup. After completing the soup I went and got myself a bowl of rice in anticipation of the meal’s arrival. I then watched six orders come out before mine, including one dish prepared for the people who ordered after I did. I was assured by the owner that my dish was next, and he was almost right because two more dishes came out before mine. The first thing I noticed when I finally picked up my order was that the food was hot, piping hot. With all of the patience I could muster I slowly pecked away at the dish, taking some of the sauce and putting it on the rice I had, then picking out pieces of fish and tofu and allowing them to cool before consumption. While I did not time myself this was clearly the slowest I have eaten in some time. I did manage to eat half of the large plate of food and part of another bowl of rice before declaring surrender and boxing up the remaining food for today’s lunch.

Today’s Personal Project
Get out of work early enough to drive to the Fox Theater, hopefully feeling much better than I do now.

Stats & Goals
Daily
Current Mood – sad because I am ill
Current Music – silence at the moment
Website Of The Day – Plywood Presents, because it’ll be consuming my life tomorrow
Mode Of Transportation To Work – my car — I wanted to take MARTA but I woke up too late, felt like shit, and realized that I needed to transport my leftovers today.
Exercise (b)Log – nothing
Morning Weigh-In – I forgot

3 Responses to So The Fog Was A Cold?