When the best thing I have to talk about are the two meals (and only two “real” meals) that I ate this weekend then you know that I’ve not had the most exciting time.

Today’s Daily Challenge
List three moments in the past week when you felt completely focused on what you were doing.

Living with a sense of purpose has been linked to health benefits, greater satisfaction and happiness, and even a longer life. Finding your purpose may feel daunting, especially since it can change as you get older. Identifying the times when you felt completely engaged can provide you with a greater understanding of your gifts, passions, and values, all of which can give your life a sense of direction.

I guess my time at Plywood Presents, even though I wasn’t feeling well, qualifies as one. However, that’s about all I can conjure.

BBQ x 2
I managed to talk myself out of exercising twice this week — bike riding on Saturday, hashing on Sunday — because of the threat of lousy weather. To some degree I was correct, but in reality I probably could have managed both.

Instead, I treated myself to one large lunch, each of which were barbecue, that managed to serve as the one “real meal” that I’d eat each day.

On Saturday my destination wound up being Fox Bros Bar-B-Q. If you know me at all you know my love for Fox Bros. I used to eat there often, especially when they offered half-priced appetizers as their “Happy Hour” specials. Over the past few years I’ve eaten there fewer times because of the large crowds they attract as well as my desire to diversify. I figured that I should stop punishing myself on Saturday and eat at Fox Bros. I ordered the two-meat plate — chicken wings and ribs — with sides of brisket chili and a side salad (WHAT?!?!?!?!). Yes, a side salad. I managed to convince myself to avoid the cost of beer, so I drank Coke. The meal was predictably large, filling, and delicious. Forgetting that I wanted to run errands and not knowing that another Fox, ITP-Reader Stacy, was volunteering at Orpheus Brewing, I drove back to the ITP estate and whittled away the remainder of the day and night reading, napping, listening to podcasts, coding, and watching videos.

On Sunday my destination wound up being DBA Barbecue. DBA has really upped its game over the past year (IMHO) and even though I could not partake in the Wednesday night All-You-Can-Eat special I did manage to eat my fair share of food. I ordered the two-meat plate — chicken wings and sliced beef brisket — with sides of brisket chili and onion rings (that’s more like it!). On Sunday I drank water (what a concept!). The meal was predictably large, filling, and delicious. Not wanting to head directly home I remembered that I needed a couple of things from Target so I drove myself to the Buckhead location (that ERD location irks me) and wound up buying five things, none of which being the items that inspired the trip. I then drove back to the ITP estate and whittled away the remainder of the day and night reading, napping, listening to podcasts, coding, and watching videos.

“Which was better?”, you ask. Well, that’s tough since the meals weren’t identical. I’d have to give the chicken wing nod to Fox Bros, but that’s because I ordered them “plain” from DBA and that made them a bit dry. I’d definitely give the brisket chili nod to Fox Bros because, although tasty DBA’s was swimming in some greasy liquid. The ribs at Fox Bros were good, but the sliced smoked brisket at DBA was fantastic, so I side with DBA on this one. And come on, onion rings > salad each and every time. In other words, both meals were worthy of being the only real meal that I ate on each day; neither meal left hungry on either night.

Each evening I had one beer. On Saturday night I had a Kind Bar as a late-night snack. On Sunday I had a Clif Bar mini as an early breakfast. 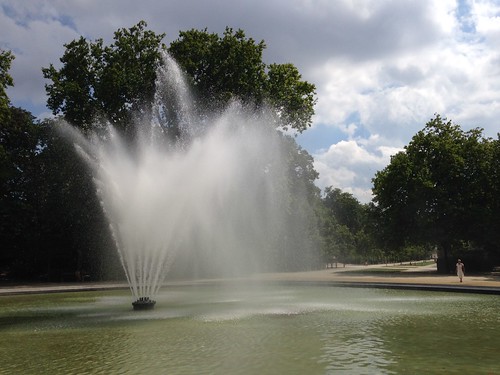 I didn’t shoot anything this weekend so I am digging into the recent archives (two weeks ago?) for something.

One of the many things that struck me as “different” were the lovely fountains in the parks of Brussels. Not only were they present, but people are actually allowed to enter them!

You can see the scale of this fountain by looking toward the right and seeing a woman standing near it. Of course the camera distorts a little, but that thing was shooting up like a geyser.

You’ll Have To Pry My ManCard From My Cold, Dead Hand
One of the podcasts I listened to on Saturday, The Incomparable, discussed their favorite BBC television programmes. During the podcast one of the presenters mentioned Monarch of the Glen, a series I watched briefly (apparently) during its original run in the early 2000s. The series is the typical “city boy must return to rural roots (in this case a stunning countryside of Scotland) to save the family from financial ruin” plot and starred one of my favorite British actors the late Richard Briers who also starred in Good Neighbors (aka “The Good Life”), one of my favorite BBC programs from my youth.

Conflicting Interest?
I used to be a member of Costco and at a different time Sam’s Club. When the locations of these businesses became less than convenient I let my memberships lapse. Since moving to the hellscape known as “the Perimeter Mall area” I have contemplated rejoining Costco but never have. Had I followed through on my plans on either Saturday or Sunday I’d be a member again today.

What’s stopping me? The conflict of deciding that I want to drastically downsize my living arrangement with the notion of rejoining a club that sells in bulk.

Today’s Personal Project
Go to the bank to convert my Euro into real ‘merican money 🙂 and start planning my life’s changes, like hiring a plumber to work on my bathrooms and kitchen sink, and scheduling an appointment with a realtor too see what other tasks need to be performed for resale.

Oh, and do laundry.

Stats & Goals
Daily
Current Mood – fair, though I feel as if I wasted another weekend
Current Music – silence at the moment
Website Of The Day – Via Grammar Girl’s podcast last week I was introduced to Crash Blossoms.
Mode Of Transportation To Work – my car
Exercise (b)Log – nothing (sadly)
Morning Weigh-In – 215 pounds. Boo!

2 Responses to A Mehzing Weekend