Well I did it, and I did it big. Last night after doing laundry I drove down to Costco and rejoined (I was a member in the mid-to-late 1990s). As my first act of change I eschewed going to the bar as I had intended and ate a quick and cheap dinner of a Pepsi with a “Chicken Bake” (think “chicken, bacon, cheese, fat, goodness”) for a whopping total of $3.83. Hello Paulie McFrugal!

If all goes as planned during the next year there will be big changes in my life, some of which will benefit from being a Costco member.

And while I toil at an office near Perimeter Mall I shall avail myself of the Costco nearby as often as possible. Anyone want to get in on a 144-roll package of toilet paper? 🙂

Today’s Daily Challenge
Read about Body Mass Index and what it means for your health.

There are many benefits to maintaining a healthy weight, like better sleep and reduced risk for heart disease and cancer. But everybody is different. What does a healthy weight mean for you? Your BMI can indicate whether you’re at a healthy or unhealthy weight. As you read about BMI, think of it as one factor that can tell you and your doctor more about your overall health.

Where Were You When You Heard The News?
People my age (a young-looking 49, thankyouverymuch) should get used to hearing about the deaths of people with whom they grew up, even if these people are one of the many you’ve never met. However, hearing of Robin Williams’ alleged suicide yesterday took me down a few pegs. I had just sat down to eat my Costco dinner feeling optimistic about the changes I am about to undertake when I read the news. I did not know Robin Williams, but his talent was a thread that permeated my life from the first time I saw Mork and Mindy in the late 1970s. (Honest Side Note: As I was prepubescent I didn’t realize it at the time but I thought Pam Dawber was hot.)

I Might Be Reframed
One of the weekend activities I failed to mention yesterday was picking out five potential new eyeglass frames from Warby Parker. (Side Note: Warby Parker is going to open a store in Buckhead sometime this year!) 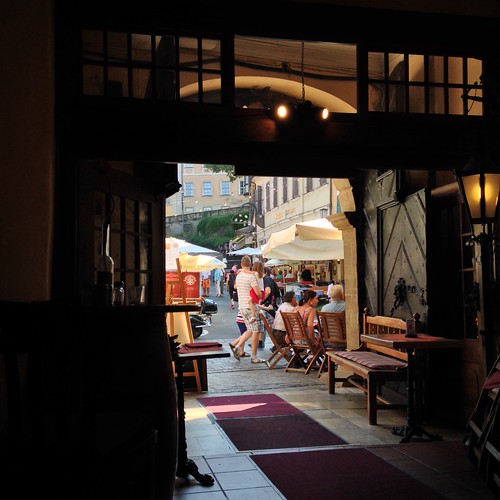 This is a photo I took while eating dinner (that pig’s knuckle I posted while still on vacation) at a restaurant whose name I cannot recall in Bamberg, Germany. Though far from a “great” photo I like the way it captured my environment contrasted with all of the others who were worshipping the sun and heat that day.

Court Will Be Back In Session
Tonight the boss and I will return to LA Fitness to smack the racquetball around for awhile. It seems as if it’s been a month since we’ve played racquetball, and shit, it just may have been. No, I sit corrected. I recall at least one instance where I whined about my “shin splint” while playing, the “shin splint” that still haunts me a bit, which means that it really wasn’t a shin splint after all. Since I’ve been very bad at forcing myself to exercise I am really looking forward to getting onto the court tonight.

Today’s Personal Project
Get some exercise.