As I looked at the goals I set for August I realized that I accomplished none of them. Let’s try this again.

Today’s Daily Challenge
Ask one person to describe the best part of his or her day so far.

Feeling connected makes us happier … and what better way to do it than by asking people about their day’s brightest moment? The positive feel-good effects of remembering and describing the best part of the day extend to the both of you, so everyone wins. You may even be asked about the best part of your day in return, allowing you to reflect on what’s made you happy.

Downtown
Though not as early as I had originally planned I left the office on Friday early enough to be a large portion of traffic. My journey was so uninhibited that I went all the way home prior to going downtown Theatrical Outfit to see “The Savannah Disputation”.

I was a little concerned when I was told that the play ran for one hour, fifty minutes with no intermission. So taken aback was I that I forgot that the play started at 7:30pm and not 8:00pm (as they used to years ago) so I had to sneak into the theater and sit in the back row (no hardship as the theater is rather intimate) upon returning from the restroom.

Had I not been told that the play would run nearly two hours I would have never known. The acting was so good and the play so well written that I completely lost track of the time and was shocked to see the play end.

That night the theater held a raffle for a free three-play season pass. When the man said that the winner was sitting in seat C-107 I was initially thrilled. C-107 is my season ticket seat, on the first Saturday of a play’s run, not the first Friday. Dangen!

Midtown x 2
On Saturday night I went up The Loft to see The Polyphonic Spree perform. When I got up to 17th Street I pulled into the empty lot across the street from Center Stage / The Loft / Vinyl until I found out that they were charging $15 to park. “That’s too much.” I told the attendant as I got back into my car and pulled out of the lot. I wound up parking in the parking garage attached to the venue for $8 instead. I used my $7 savings to buy a beer at a hotel bar instead.

I returned to midtown on Sunday to finally see the “Dream Cars” exhibit at High Museum of Art. Prior to going to the museum I at a wonderfully filling lunch at Baby Tommy’s Taste of New York; had this place been in existence when I worked a few blocks from its location I would have been in heaven. The “Dream Cars” exhibit was cool, though the place was too crowded (and I was there early!) so I never even attempted to take any photos.

I returned home by 3:00pm on Sunday and managed to waste the remainder of the day and evening napping and watching videos.

ITP Flickr Pic
“I Wound Up Having A Good View Tonight” (The Loft, Atlanta, GA, USA) 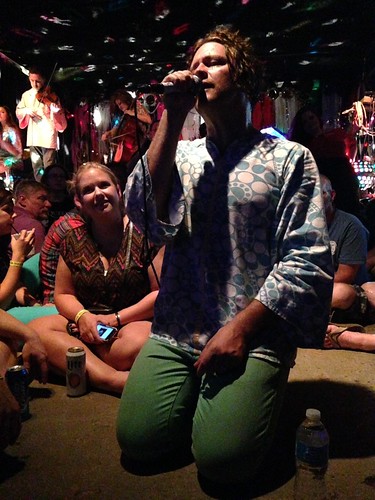 For their final song The Polyphonic Spree’s lead singer Tim DeLaughter came out into the audience, asked us all to sit, and then sang the song. He sat right in front of me, and on a couple of occasions turned 180Â° and sang toward the rear, putting me front and center.

This is best my wee little iPhone 5c could do in the low light.

OTP x 2
It was hot and humid this weekend as a group of six met at Arabia Mountain Nature Center to go for a bicycle ride. With the exception of the heat and humidity I very much enjoyed riding on the Path and could see myself doing it again one day. One thing I may not do again is consume a 22-ounce Three Taverns Brewery “A Night In Brussels” IPA (at 7.2% alcohol) after a ride because by the time I got home it was kicking my ass. I inadvertently took about a twenty-minute nap after showering yesterday afternoon.

ITP-Reader Barb and hubby Allan invited some folks up to Marietta to consume some pork butt. The meal was lovely, made even lovelier by the fact that it was the only true meal that I ate yesterday. Eating only one, albeit large, meal seemed to be my M.O. this weekend as that’s what I did Saturday, Sunday, as well as Monday.

Yard Work Is Hard Work
On Saturday morning I was outside relatively early (9:30am) cleaning up some fallen debris and getting ready for some lawn mowing when I was approached by my neighbor. She, who moved onto the street the same year as I did, informed me that she will be putting her house on the market in October. Geez, in fifteen years only one house had been sold, and now in the past six months one sold, one was put up for rent (and the sign is now gone), one is currently listed for sale, and one is being renovated. Looks like I’ll have some competition.

I worked for about two hours on Saturday, dragging fallen limbs, mowing lawns, and leaf blowing. I dare say things looked pretty okay. On Saturday afternoon a violent rain storm passed through East Atlanta and at one point I though I felt the house shake. Upon going outside fetching a small branch that was not littering my newly-cut back yard I saw that my pine tree had lost a formidable limb which was also littering the back yard. Fortunately the limb dropped with no further damage other than to produce a house-shaking thud.

On Sunday morning I was in the yard again, this time chopping up that pine limb and dragging it to the curb, as well as cleaning up some privet that needed to be chopped back (there will be more of this in my future). After two more hours of yard work I was drenched in sweat and pooped.

In toll I built two large stacks of limbs for the City of Atlanta to pick up some day.