And There Will Be No Cake?

Today should mark a day of celebration in my life. Ten years ago today I published my first Inside The Perimeter blog post on Blogger (anyone else remember that platform?). On previous anniversaries I included the first post, but I haven’t the time to do so today.

Instead of celebration I am tired, so very tired. Work has pulled my in so many directions that I no longer know which way is up and I am constantly being pressured to deliver a project that is not ready, in part because the foundation on which it depends is also not ready.

I’ve also managed to drive myself into the dirt by enrolling in German classes, which still scares me but at least I understand my desired goal, as well as attending out-of-town career fairs and conferences. And if all goes as expected today I’ll be in Little 5 Points tongiht at Horizon Theatre for their production of “Native Guard”. If I manage to get down there early I will celebrate Anniversary #10 with a pint of beer at a local establishment. All of these things are taking my valuable recovery time. I know that I have the power to not do these things, but they are the constituents that make up the experiences that I want in my life.

ITP Flickr Pic
ITP-Reader Lisa and I have a long-standing joke about garlic knots from a place called “Barley’s Taproom” in Asheville, NC. One of the first times I met the Lisa and Randy in Asheville we went there and I ordered the garlic knots, because I love garlic knots, hoping that they would be awesome; they were a little less than awesome on that day. I’ve since ordered garlic knots each time I have visited, never quite achieving the level of satisfaction for which I hoped. 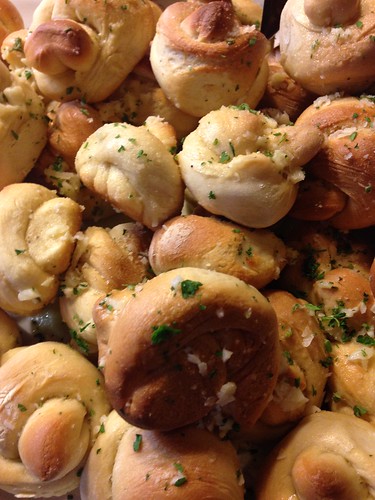 On Monday night there was a happy hour celebration at the Barley’s Taproom location in Greenville, SC. When they brought out a large tray of garlic knots I just had to take that photo and send it to Lisa.

How were they? Good, but not nearly as good as I’d hoped that they would be. I think Barley’s misses out by not having them arrive swimming in a pool of garlicky butter.

This Was Nearly The End
Ten years is a long time. I know, I’ve been without a girlfriend for at least that long. It’s even scarier for me to think that I have been in my house for 15.5 years, at the same company for nearly eighteen years, and come December I will have lived in Atlanta for twenty years.

I’m not happy.
I want change for the better.
It’s up to me to initiate change.

For months I considered ending Inside The Perimeter today. Let’s be honest, my life has been less than exciting since returning from Europe and I have neglected this blog greatly recently. But I am not a quitter. If I were a quitter this blog would have ended years ago when the popularity of blogging waned. And since I abandoned Facebook three (?) years ago this blog is my lifeline to those of you that are my friends and I need that.

Will Inside The Perimeter last ten more years? Highly unlikely. But I shan’t worry about that today, instead I want to (briefly) relish in my accomplishment for making it this far with at least a handful of posts of which I am proud.

9 Responses to And There Will Be No Cake?