Did you think of Paul Harvey when you read today’s title? Do you even know who Paul Harvey was? I’m feeling a bit old today.

Yesterday was an interesting day of presentations and panel discussions at [360|iDev min], all of which would probably bore you to tears. I listened intently (to most), writing code for the 9-to-5 during the discussions which The day ended with beer and food at the local Barley’s Taproom where I over imbibed on beer and food, causing me to pass out in my hotel room very early.

They are building a new hi-rise next to the building in which the conference is being held. I guess this guy really had to go to the bathroom. 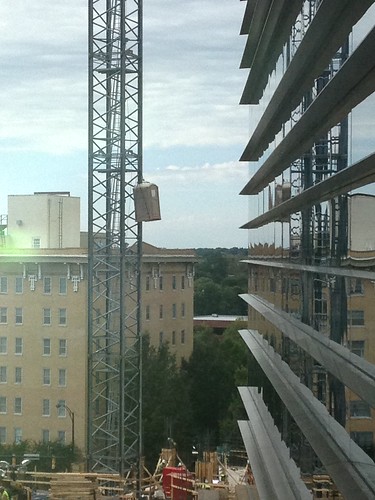 I failed to mention yesterday that I have once again joined the The Amazing Race bandwagon, catching up on the first two episodes thanks to iTunes downloads that I brought with me on my iPad. Is it too early to state that I don’t care for any of the teams and that I was especially pleased with the elimination of the first team even though I am a breathing heterosexual male?

Today will be Day Two (hence the conjuring of Paul Harvey) of [360|iDev min], which for me will be a little shorter than a full day for me since I will be driving back to Atlanta tonight to resume my German classed, the second in the A 1.2 series. It’s safe to say that I shan’t be drinking any beer before my journey back inside the perimeter.