Metaphorical ones, not real ones here at work. We had a planned power outage this past weekend so I shut down my Mac. Upon reboot this morning neither the keyboard nor mouse were being recognized. After about ten minutes things magically worked, but there was a software update that required a reboot, and now the mouse is being recognized but the keyboard is not. Ugh.

I’m back from another lovely weekend at LEAF with the Raleigh Royalty. We met up on Friday and hung out together through what was a by-and-large great weather weekend. There was a smattering of light rain on Saturday night that literally put a damper on the evening, and the winds were high at times making things a bit chilly, but for an October weekend in Black Mountain we couldn’t ask for much more.

With the exception of picking up two new inexplicable scratches on the passenger’s side, the Jackmobile handled the trip well, even after I accidentally hit a curb driving home from a concert on Thursday night. Before you ask, no, I was drinking and driving, I just wasn’t paying close enough attention.

Of course today I am fighting allergies/a cold from being around dust and grass in cool weather.

ITP Flickr Pic
“And I Thought That I Was A Glutton For Punishment” (Black Mountain, North Carolina, US) 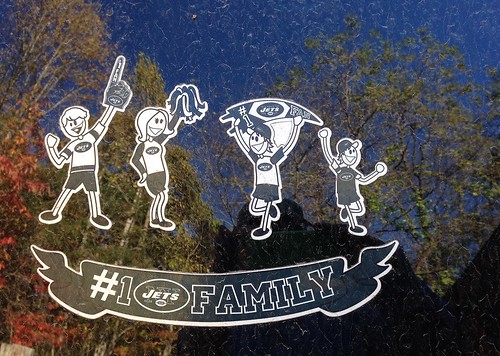 Not only did the mini-van (with a North Carolina license plate, I might add) have this sticker, it also sported a front license plate that said “#1 Jets Fan”. I wondered if the person had lost a bet.

In the background you can see some of the Fall colors; the darkness is my shadow along with one cast by the building next to which the minivan was parked.

All I Want For Christmas
Are new head coaches for the University of Florida Gators and the New York Jets. Both teams are once again mired in embarrassing seasons. Of course I’ll be buying myself the real things that I want for Christmas, but getting these would be an added bonus.