Sorting It All Out

I’ve spent much of this morning going through my “Needs Action!” folder that I keep in my briefcase preparing for today’s activities. I’ve been remiss in keeping up with the things in this folder, but thankfully it has not cost me financially.

Today I have an appointment with my auto insurance provider. It’s time to renew, and I’ve finally realized that I should be saving myself a few hundred bucks a year by dropping Collision from the Jackmobile’s policy. Old Jack is now 12.5 years old, has 180k miles, has much of its front clearcoat missing, and has a nice scratch along the back from the time he was hit (and run) while parked in the lavanderia’s parking lot. There is no way I am going to spend money on repairing any of this, never mind and future body damage so I might as well drop that portion of the coverage.

While out and about I’ll be dropping by a local post office to mail my Sharpened Stone Dissolution paperwork, as well as a box to my brother containing something I hope he likes; I shan’t discuss the contents of the box here in case he’s still reading the blog, and I kind of want it to be a surprise. 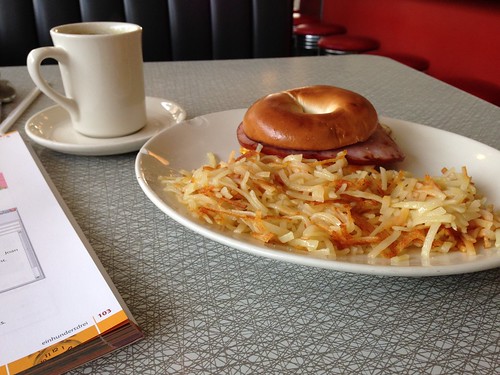 After voting the other morning I sat in such bad traffic, it took me nearly thirty minutes to travel from East Atlanta to Poncey-Highlands, that I pulled off the road and stopped at The Majestic for breakfast.

Last night I worked my down to Virginia-Highland in time to get my hair cut and then waddle over to George’s for dinner and a few beers. While the running crowd was rather scant I was able to spend so time chatting with some longtime hashing friends including ITP-Reader Steve.

Once again I was pooped when I arrived home, most likely a function of the bizarre sleeping pattern, specifically my bizarre non-sleeping pattern, and dropped into Slumberland rather early. Of course this meant that I was wide awake at 2:30am again.

Tonight it’s off to Buckhead where I’ll be hearing The New Pornographers perform for perhaps the fifth of sixth time, this time at The Buckhead Theatre (nee “The Roxy”). I’m also excited to hear fellow Canadians The Pains of Being Pure at Heart open the evening as well; I don’t recall ever being able to make it to one of their previous Atlanta appearances. As an added bonus I shouldn’t feel alone tonight as I’ve heard that ITP-Readers Terri and Betsy, along with much of their posse will be there as well. W00t!

8 Responses to Sorting It All Out