It’s intriguing to me how many people I see on MARTA repeatedly. What’s even stranger is that I seem to see the same folks in bursts.

A Miss And A Hit
Thanks in part to MARTA’s ability to bypass stopped Atlanta car traffic I made it down to Little 5 Points with ample time to eat dinner before going to Horizon Theatre for last night’s performance of “The Santaland Diaries”. 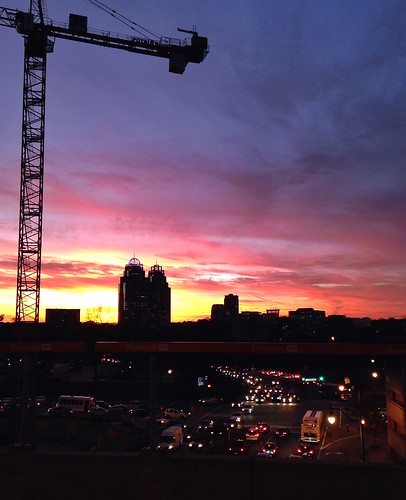 One of the benefits of riding MARTA from the Dunwoody station is a good view of the Concourse Buildings (King and Queen), as well as Atlanta’s shitty traffic. The crane you see in the foreground is for the new State Farm HQ building — bringing another large office building should ease traffic immensely.

I walked from Horizon’s parking lot up to the Yacht Club where I decided, no matter how wrongly, to treat myself to dinner and a beer. I entered the room, stepped quickly through the smoking section, and found a table in the non-smoking section.

A quick aside. I know El Myr doesn’t give a shit if I ever return, but I cannot even think to eat there again until they ban indoor smoking.

As I entered the non-smoking side of Yacht Club I saw this year’s array of Gingerbread Trailers and damned myself for forgetting about this even again. Seriously, I’m amazed how much information I can forget in a year’s time.

I had ample time to gaze at the trailers because in the ten minutes I sat at a table I never saw a server. So I got up and left.

I considered going to Porter Beer Bar but it looked packed and I didn’t have a lot of time, so I wandered up to Little 5 Pizza and ordered a couple of slices and a Coke.

Another aside, I’ll always think of Little 5 Pizza as a Fellini’s because that’s what it was when I moved to Atlanta in 1995; oh, and I still miss The Point.

Two mediocre slices of pizza later I wandered back down to Horizon where I settled in for an enjoyable evening. Even though I felt like the lone singleton in a sea of couples I once again enjoyed the performance, which is tweaked slightly every year.

As I’ve proven with the Gingerbread Trailer I forget a lot of things, including how many times I’ve seen “The Santaland Diaries” performed.

I’ve been told that I need to release some software today so I better get to it.

9 Responses to Creatures Of Habits