I suppose car names are a lot like hash names and have to be earned. 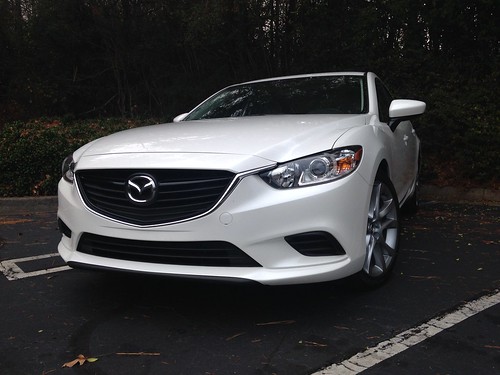 For the record: I parked this way only to take the photo. While I admit that I will be parking away from other cars for awhile to diminish the chance of door dings I’m not one of those new-car douchebags who takes up more than one space.

I loved the Jackmobile. Had Honda treated me as a customer they wanted to keep when its transmission crapped out in 2010 I would have been a Honda man for life. But they didn’t.

Yesterday I took possession of a new 2015 Mazda 6. It’s a four-door sedan, something I never expected to own again (the last four-door car I owned was nineteen years ago), containing all of the amenities that I think I want — tan “leatherette” seats, automatic climate control and a bluetooth stereo system. In true Paulie fashion I went the frugal route, getting the middle-of-the-road Mazda 6 and not the top-of-the-line model, though I did add a few extra features like LoJack. I’m trying to figure out how I am going to transport a bicycle because I’m not keen on jumping back into full-time roof rack world; time will have to tell on this one because I’m also not a fan of temporary trunk racks. Funny how I now remember having this same dilemma when I toted my mountain bike up to Fort Yargo to do an adventure race with the then-childless Raleigh Royalty way back in 2002/2003.

If car buying is in your future might I suggest the following tips:

This morning in the shower I realized that I did one thing I regretted, I forgot to pop out whatever CDs were in the CD player. While of no monetary value, there was one mix-CD given to me by an incredibly dear friend that I will miss. Oh well, such is life. The shower is such an amazing place of clarity.

Since I am taking the day off from work tomorrow I need to make one final push to get features in my CES app done today. Tomorrow expect a short 2014 year recap and some insight as to what I plan to do next year.