‘Twas The Days After Christmas

I had a wonderful Christmas “break” (parenthesized because I actually spent most of yesterday at the office).

On Christmas Eve I ate an absurd amount of delicious food at Gunshow. I left the building with my distended stomach aching it was that good and plentiful. There were appetizers — brie, sausage balls, Swedish meatballs, entrees — pork, roast beef, seafood paella, sides — corn casserole, squash casserole, roasted Brussels sprouts, green beans, and of course desserts — Black Forest cake, bourbon-infused fruit cake, key lime pie covered with chocolate, homemade vanilla ice cream, and birthday cake for the baby Jesus. I probably should have taken foodie photos, but I was so eager to eat that I never considered doing so.

On Christmas Day I crashed the Tasty China party and had a wonderful meal with ITP-Readers Debbie, Steve, and Barb. At the time I arrived at Tasty China I wasn’t sure how much I could physically eat, even with skipping breakfast that morning, but once inside I managed to do some major damage on the food presented to us. Later that afternoon the boss and I went to The Porter Beer Bar in Little Five Points, which was packed within minutes of its opening, for some tasty beers; while there I also ran into a an old friend and caught up with her for a few minutes.

After much research and deliberation I think that I’ve settled (actually the appropriate word for this purchase) my mind and will be attempting to make a car purchase this morning.

Last night I melancholy cleaned out the Jackmobile (finding a few things I thought that I had lost!), including taking off the roof rack that has adorned it for nearly a decade; it looks naked to me now.

“What Could Have Been” 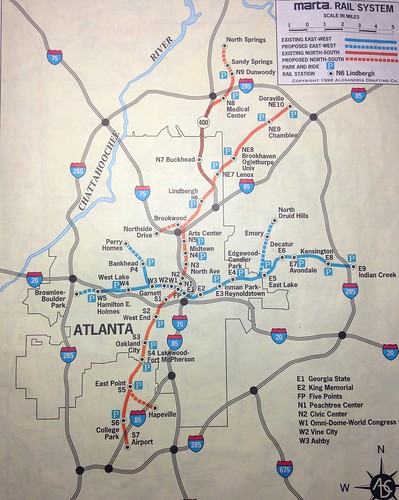 When people complain about MARTA’s lack of train destinations I often mention this map. I rediscovered this map while cleaning out the Jackmoble in preparation for sale.

Of the proposed line additions I think the only one that came to fruition was North Springs.

Though Cobb and Gwinnett counties famously get skewered for not agreeing to bring MARTA into their respective counties, as recent as 2000 inside-the-perimeter-Atlanta had a “not in my backyard” attitude toward MARTA trains.

Well, the time has come. Hopefully when I type tomorrow’s blog post a deal will have been done.

17 Responses to ‘Twas The Days After Christmas