Not Even One Drive Clean And Dry

I must have been desperate to be outside yesterday, though I didn’t maximize my time as I should have. However I did wash and vacuum the M6, and even installed the new all-weather floor and trunk mats. SHOCKING! By installing the mats I also received the added benefit of ridding my house of two large boxes sitting on its floors. Who am I?!?!

Had I not felt compelled to do more things around the house, sadly with mixed results, I would have taken the M6 out for a “Look how clean my car is!” drive. Alas, I stayed at home all Sunday so its first “clean” drive was in today’s rain.

I Was Responsible On Saturday
After waking early and putzing around the house I looked at the clock in shock to see that it was already noon. Fortunately I had showered but I still had to scurry around and get out the door in order to drive up to Fellini’s Pizza on Howell Mill to meet up with ITP-Reader Stacy and Aron for our scheduled 12:30pm pre-brewery lunch. With the exception of a few handful of peanuts I had not eaten anything so by that time I was hungry, and a Fellini’s salad and a slice of pizza did the trick of filling me up nicely.

After lunch we three met up with two other friends at Second Self Brewing, and as you can see in this photo we were not the only other hashers to taste Second Self’s offerings that day. 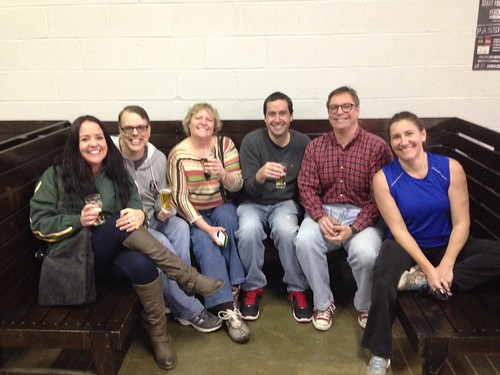 I was a good boy and limited my consumption so that I could drive home without concern. In all honesty I was also limiting my consumption in an effort to limit my calorie intake as well as the damage to my body. These two efforts must continue to stay front in my mind at all times.

I was home early on Saturday afternoon and should have done something productive or fun outside then, but I squandered the rest of the day by watching some videos on my iPad and napping. At least at that time I knew that I had a perfect weather day ahead of me on Sunday.

Had I remembered before 11:00pm that Cold War Kids were playing at Buckhead Theatre I might have hustled up there for their show, but I didn’t recall this until it was literally too late.

Not Even A Rerun Can Ruin My Favorite Music Show On The Radio
One thing I did remember on Saturday was to tune into WABE for “Jazz Classics” with H. Johnson; I love this show. I often hear this show when I return from a theatre show or dinner on Saturday night and think “I should remember to listen to this when I am at home!”.

And I did.
And there was much rejoicing.

Speaking of home audio, once I finally figure out “The Plan” there will be some overhauling performed at the homestead.

Speaking of homesteads, ITP-Readers Steve and Debbie — I hope you were able to use this gorgeous weekend to find a new homestead. The Moreland Day Spa will be missed, but I’m certain that your next homestead will be just as nice and I look forward to the day when I can head down for a bike ride and a beer again.

At some time during “Jazz Classics” H. Johnson had a guest on his show that talked about his Tuesday night Jazz Jam Session at Twain’s in Decatur. In the conversation he mentioned that the previous session would be the last at Twain’s because they were going to remodel and remove the stage. At this point I recalled trying to eat at Twain’s once and seeing them closed for remodeling, so I knew that I was listening to a rerun. Bummer. The interviewee went on to say that they were going to move the show to Eddie’s Attic. Apparently this didn’t fare well as it appears from my research that the Jazz Jam Session is no longer there. Dangen!

Monday Night Lavanderia
It’s that time again, lavanderia night. After work I will be fighting traffic into Chamblee in order to wash and dry my clothes. If at all possible I am also going to attempt to get in a short workout, probably cardio, after doing laundry. I must keep reminding myself “Work and Workout on a Daily Basis”, it’s the only way I am going to maximize my enjoyment during my remaining time.

Hope your weekend was awesome and that today’s rainy Monday doesn’t bring you down.

13 Responses to Not Even One Drive Clean And Dry