The Stoppage Of Time

It is said that a stopped clock is right twice a day, kids this was coined prior to the invention of digital clocks. The only thing worse than a stopped clock is a sporadically running one, because it is rarely correct. Yesterday I recalled that the watch I was wearing falls into the latter category and caused me to be late to a meeting because it was running five minutes slow.

Since I put a new battery into this watch no more than six months ago I cannot suspect a drained battery.

I cannot own an unreliable watch, therefore I can no longer own this watch. Pity, because I like it…

Wash, Eat, Exercise
You will need no hint as to guess which one of these three things did not occur last night.

By the time I was done with laundry, approximately 7pm, I was really hungry. And because I was by one of my favorite restaurants, El Pollo NorteÃ±o, I decided that I was going to eat.

And I did.
And there was a smattering of rejoicing.

On my drive home I attempted, and failed, to call my mother from the M6 using its voice-dialing feature. Maybe I’m too old to understand this fancy-pants technology? I don’t know. I suppose that sometime this week I will breakdown and RTFM (read the fucking manual).

ITP Flickr Pic
I took this picture of the Raleigh Royalty’s cat Bacchus. 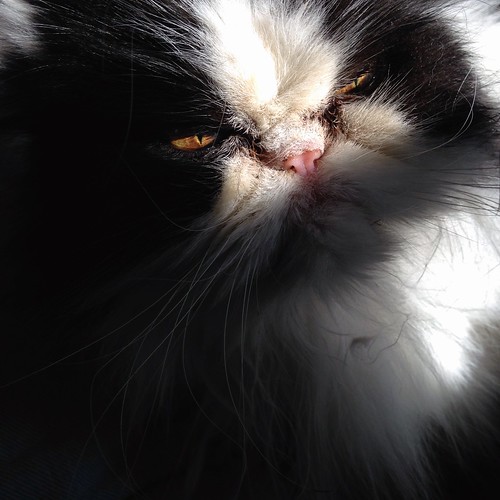 Even though I like cats Bacchus and I didn’t start out as friends, he was never willing to come close to me. I guess time and familiarity have warmed him up to me as now he let’s me get pretty close to take shots like this.

Though I spent nearly the entirety of my lavanderia idle time reading my German “text”book (text is in quotes because this is a modern-day textbook that contains very little text) I still do not feel prepared for tonight’s German class. And I’ve had two weeks to prepare!

I guess it once again boils down to the fact that I am not using my language skills enough to have it set in, especially they vocabulary. So if you are around me in the near future and hear me muttering to myself it’s not because I’ve had a stroke, it’s because I’m practicing my German. At least I hope that will be the reason.

13 Responses to The Stoppage Of Time