Tax On, Tax Off

With my initial meeting for personal taxes complete it was time for me to submit my delinquent tax information (in which I declared truthfully that Sharpened Stone again made no money) to the City. Now, if I can just get the City to recognize that I mailed them dissolution paperwork for Sharpened Stone at the end of last year I will never have to do this shit again. I am really looking forward to finally undoing the mistake I made about four years ago.

I Visited Harry And Lam Again
No, the M6 is fine.

Yesterday I drove a coworker to Peach Auto so that he could pick up his car. In doing so I stopped in to say hello to Harry and let them know that I’d abandoned them because I bought a new car, not because I didn’t like their service any longer. While there Harry mentioned that I should beware of a potential noise coming from the Mazda’s SkyDrive transmission and if I hear it act immediately while it’s still under warranty. I swear to Jeebus that if I have another car with a faulty transmission I will have to sue the auto industry. Seriously, I will, because I will not be paying to put a second transmission into this car.

I Had My Chance, And I Blew It
Sounds like a good recap of my loveless life. But no, this time I’m referring to a Spinning-style exercise bike.

When I was in Fry’s a few weeks ago returning some stuff I noticed that they were selling Spinning-style bikes, for a fairly reasonable price. I thought about it briefly, but then talked myself out of it. “You should use the ones at LA Fitness.”, “Why are you spending more money?”, “It’ll be warm outside soon, you won’t want to ride indoors then.” I conjured quickly. So I walked away.

Yesterday still having an abundance of body fat and no time to go anywhere to exercise I had a change of heart (before I have a heart attack) and it was too late. All of the exercise bikes from the Duluth store have been sold.

I value my methodical decision making in regards to purchases, though some may argue that I buy too many things regardless. But some times it does come back to bite me in my ever-widening ass. 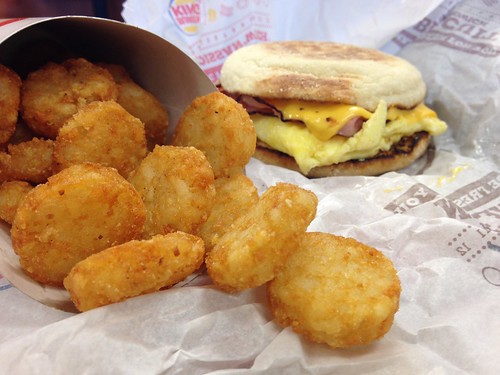 I told you that I ate Burger King for breakfast yesterday.

You know what’s crazy? I love this photo.

Technologically Strong? Well….
One of the items I brought back from Florida was a television owned by my mother. A few weeks ago she declared that it had stopped working properly and I, with much bravado, believed that I could use it regardless.

Even without its remote, which she had never received from the original owner when the tv was gifted to her, I was certain that I could get the tv to recognize inputs other than the RF (cable) input that I was certain was being used by my mother. I hooked up some video sources, plugged the bad boy in, and watched in dismay as it repeatedly perform channel auto scan, then cycled through its HDMI, video, and composite inputs, never once recognizing my video sources. Next I tried in vain to get the tv to acknowledge that I was pressing its Menu button so that I could start fresh, but it refused to recognize.

I tried everything, including downloading the manual and reading it. Yes, I even RTFM! Nothing worked. I even hoped that the tv had a firmware upgrade that I could apply so that I could then reboot it cleanly to start it as if it were brand new again. But alas there was no firmware to be found.

I may have had a case of misplaced bravado.

I will try again once more before declaring defeat and adding it to America’s recycling pile.

My First Sight Of The New Ponce City Market
Tonight I will be stepping foot into the new Ponce City Market for the first time. I have had one encounter with the old Sears & Roebuck building previously, but that was when it served as City Hall East; at that time I had to go there to get the paperwork to reclaim the Jackmobile after it had been stolen from me.

The reason for tonight’s journey is to watch a live recording of a podcast to which I listen called On Doers. Tonight the host will be interviewing the founder of Mindspring (now a part of EarthLink; does EarthLink still exist?), and the mastermind behind Glenwood Park, Charles Brewer.

I’ll actually be returning to Ponce City Market next week, but I will wait until then to unveil why I will be doing so.

11 Responses to Tax On, Tax Off