Sometimes It’s Not What You Expect

Here’s a tidbit that shouldn’t surprise you. I was the first to arrive for last night’s “On Doers” interview at Ponce City Market. Shocker, I know. Of course I had to go to the bathroom and with very little open I had to ask the desk worker for the apartments attached to the retail space if she knew where there was a public bathroom. She did not. However, she kindly let me use the bathroom for the apartments. Wouldn’t you know that had I gone through one set of double doors leading to I would have found the updated restrooms from the old Sears & Roebuck (or at least I think so since I didn’t live in Atlanta when that store was open).

The interview was entertaining, but I was surprised to hear that Charles Brewer, who made his fortune starting the internet service provider Mindspring, said that he praised Google for what they have done, but admonished Facebook (not surprising) and Apple (surprising) for their business practices. Further, he said that he might want to start a new venture, one which reduces the time spent in front of “screens”. Remember, this man pioneered and made is fortune getting people access to the internet, so we it could be said that he was instrumental in creating the problem for which he now seeks a solution. 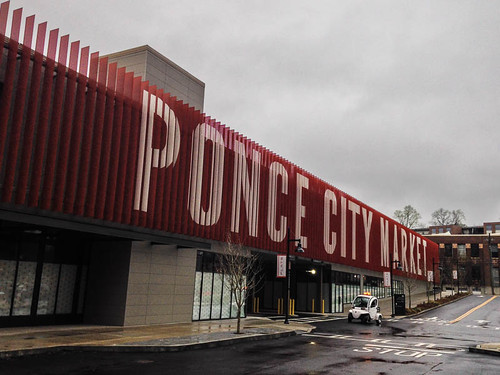 One of the new faces of Ponce City Market. Had I only been there when the security guard was not parked outside.

Supporting The Locals
On a recent podcast I heard about Atlanta’s first distillery to open in 106 years, Old Fourth Distillery. In the podcast they said that their first offering, a vodka, was available for purchase at Green’s. Since I was soooo close to Green’s last night I decided to pop in after the interview and purchase a bottle. If you know me well you know that I rarely drink alcohol other than beer and wine, but to support local industry I decided to give their vodka a try. If I can’t drink it straight I can always use if to make Screwdrivers.

Speaking of screwdrivers, I learned the German word for helicopter the other day, der Hubschrauber, which literally translated means “the lifting screwdriver”. The more you know…

Waiting On An Electrician
Back in January I bought an Angie’s List “Big Deal” for $139 $169 worth of service from an electrician. The reviews for the company were all positive, so I jumped in. Today the electrician is scheduled to arrive and I have a small job for him/her to accomplish, replacing a work light in the basement utility room, as a trial before I potentially hire the company to fix some of the other electrical foibles of the ITP estate.

Oddly (to me) this company doesn’t work on Saturdays, a day that seems ideal to have someone be at home so that work can be done. So I’m sitting at home right now awaiting their arrival instead.

15 Responses to Sometimes It’s Not What You Expect