I could write volumes today, but since two of my main commenters are on their way to what may prove to be a damp practice round of The Masters practice round I’ll keep it curt.

Oh, and I also have a ton of work to accomplish this week as well which is another reason I can’t spend much time on this today.

We’re #3! We’re #3!
I had no idea what to expect from Friday night’s Harman Kardon Battle Hack. It was clear from the project that I agreed to attempt to write that I had no idea.

The event, which was delayed by some technical difficulties, was good and rather rewarding. A group of perhaps forty nerds, including some female Georgia Tech students, gathered to hear a short presentation before embarking on development. Ad hoc teams were created and for a while I was the only one on my team who could code Objective-C for the iPhone. My team tried to write a “moods playlist” app that would interact with the Harman Kardon hardware we were provided. Well, we came up pretty short. Fortunately for us there were only four teams competing, many were there to observe and not compete, and because we managed to show something we finished in third.

The first-place team, consisting of Tech students, was smarter than we were and modified an existing Harman Kardon example app, rather than starting from scratch as we did. They got their project working.

For my efforts I won a pair of AKG Y50 Headphones and a Harman Kardon Adapt hub with which I can continue my efforts. Sweet deal.

There was an after-hackathon party as well, consisting of us going to the penthouse of the ATDC building and drinking more beer.

I arrived home sometime after 12:30am. It’s harder for me to stay out late and get up early these days. 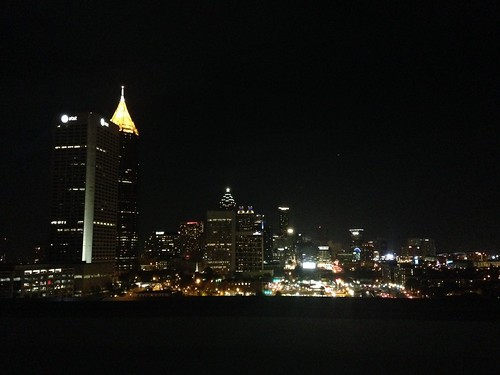 On Friday evening I got to go up to the penthouse of the ADTC building. Of course I had to take a shot of midtown/downtown even if all I had to shoot with was my iPhone 5c.

Unexpected Hockey
While lounging about after washing the M6 on Saturday, I know it’s pollen season but I needed to start getting some of the bugs and dirt off of the M6, I received a text from ITP-Reader Laura asking me if I wanted to join her, ITP-Reader Bob, and their son for some hockey out in Gwinnett. I naturally said sure.

[side note: I’m finding one thing that Mazda didn’t to an excellent job with, the M6’s paint. I’ve found another small chip off the hood. I’m going to have to get some touchup paint the first time I take it in for an oil change. If things get any worse I’m going to start taking them up on the paint insurance that I paid for when I purchased the M6.]

With just enough time to finish cooking the chunk of pork I had placed into a small crockpot earlier in the day I packed up the food, set it into the refrigerator, and made the drove out to Gwinnett for our 6:30pm meetup time.

The Gladiators game was fun even though they lost in a shootout.

Perhaps the saddest moment of the night was my inability to get two of my chuck-a-pucks over the netting that protects people from getting hit by pucks.

It’s Easter Sunday, Hop On A Bike
I drove my bike further than I rode it yesterday, but at least I rode it.

Yesterday morning I participated in my first(?) Easter Sunday ride with ITP-Reader Barb and others. We met up at the Rambo Trail Head in Dallas(?) and rode approximately fifteen miles out, turned around, and rode the same distance back. For this being the first time I’ve ridden in a handful of months I did alright, though my legs and nether region are starting to feel the affects today. After the ride we sat around for a few hours consuming delicious food and beverages.

Upon returning home and unpacking the M6 I took a much-needed two-hour nap before making myself a little dinner, chatting on the phone with my mother, and watching some non-“Mad Men” video (I can no longer watch in real-time since I got rid of my satellite box — long story — so I’ll be watching tonight) before falling asleep.

Lavanderia Lunes Returns!
Tonight I’ll be doing some laundry and then getting some dinner out before returning home to watch the episode of “Mad Men” that I downloaded (legally) this morning.

5 Responses to What A Weekend