I think I am still waiting for March to go out like a lamb, and today marks the first day of May.

Today also marks another morning during which I decided not to get out early to beat the rat race, but rater to remain at home until the rats have finished racing. Consequently you can add the infamous Chinese Fortune Cookie suffix “between the sheets” to today’s blog post.

A Fun Thursday Night At Monday Night
Traffic was a bear, but I managed to get to Monday Night Brewing in time to be twenty minutes early.

I’d bet that we had the largest group of friends last night. Included in the crowd was my boss, who after I joked about passing my Georgia Ale Trail Passport to so that he could also save $2, was admitted for the discounted price as my “plus one”. I think we need to figure out how not to come off as a couple of old gay men since this is not the first time this has happened to us.

(ITP-Reader Stacy, I never received any of the photos)
Here’s a somewhat blurry photo of the crew. I bet the young lady who snapped the photo for us had been drinking. 😉 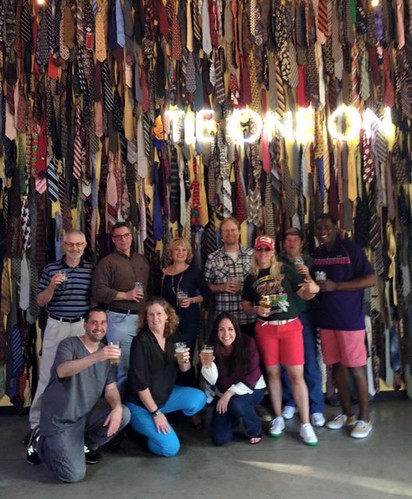 The evening was a blast, I consumed my fair share of free samples before the majority of our crowd headed to Six Feet Under on the westside for dinner. At Six Feet Under I won the “I guess the fattest guy bought all this food award again” as I was the recipient of an order of buffalo shrimp that was ordered by another person at our table. Had I noticed the gaff before having my credit card charged (shame on me) I would have disputed it; instead I informed the person who ordered the shrimp that his meal had been put on my check, just so that he wouldn’t get charged for it as well. I was tired and wanted to leave, the $8 I spent on the shrimp was not worth my time to correct the charges. And the good karma can’t hurt either…

I Want My Wit To Be Dry, Not My Skin
Today I start my routine of steroid treatment for that which ails my skin. This probably should have started last week, you know when I was trying to let my body fail at fighting it naturally, because the dryness is starting to spread to my cheeks. If I dry up much more I’m going to start looking like the fat version of The Thing

The Weekend Is Looking Great, I Need To Minimize How Much Of It I Spend In The Office
I need to figure out a way to stop being a workaholic. This weekend should have spectacular weather and I need to have fun during it. Hell, if I can’t have fun I should at least wash the M6 and mow the lawns of the ITP Estate.

11 Responses to May Day