What Goes Around Comes Around

Sit tight gentle ITP Reader for I am about to spin a tale about three people who have nearly a perfect night of trivia.

Yeah, you guessed that the three people involved are ITP-Reader Stacy, Aron, and me.

We three met at Stacy’s apartment in midtown. Aron had astutely looked up the free answer for last night “Bloodline” which I mistakenly though was the Tom Selleck show “Blue Blood” but Aron corrected me that it was some show on Netflix. We started investigating what the question tied to this answer could be, our best guess was that we’d probably have to name shows on Netflix.

The skies stopped pouring rain long enough to allow us to walk from Stacy’s to Corner Tavern in Edgewood, with umbrellas in hand mind you. Along the way we stopped into a local neighborhood store in Midtown so Aron could get a soda. As we stood inside Stacy and I noticed a black-and-white photo of the store, obviously taken some time ago, and I joked “Hey, that looks a lot like the store we are in now.” What was the past became the present. Ooooooooooooooooooooh.

During the rest of the walk the three of us discussed the Jackson Street bridge, our like for seeing short staircases that lead to nowhere (as in when the houses in a neighborhood are razed but the steps leading up to it from the sidewalk remain), and the Atlanta streetcar.

One of the movies mentioned by Stacy was Pitch Perfect 2 about which I commented that I heard it was good but could never go see it because I really dislike a cappella singing. I then mentioned that I have skipped entire episodes of the Coverville podcast because they have contained nothing but a cappella cover versions of songs.

Another topic of conversation was the positive Yelp review that Stacy had written about Corner Tavern during her last visit and how she was pleased that the management thanked her on Yelp for the review.

Shortly before trivia started we got distracted by the National Spelling Bee which was being shown on the television in front of us. Perhaps it was the beer starting to speak, but the three of us had the best time watching, ad libbing commentary, and laughing at the unfortunate closed captions. I think some of the closed captions said “[word]” not because the closed-captioner typists did not want to spoil the spelling bee for the hearing impaired, but rather that they didn’t know how to spell the word given to the contestant. FWIW – neither did I.

Trivia started out as it normally does, Aron and Stacy knocking out answers left and right, me sitting there making commentary about all things around us. During one of the questions the host played “Somebody Told Me” a song that swept the nation in 2004/2005, and I remarked “Oh The Killers, where are they now?”

We were kicking but, but not taking names, and it was at this time things started to get eerie.

First, the manager of that Corner Tavern recognized Stacy and thanked her again for the Yelp review. He mentioned how rare it is for people to leave insightful, positive reviews, and that they literally had a meeting in which they talked about the review; he then proceeded to give each of us coupons for a free beer during our next visit. Nice!

Then, we encountered a question whose answer we did not immediately know. What musical term comes from the Italian phrase meaning “of the church”? Stumped we were. Maybe it was the spelling bee starting to wear on me but I started dissecting the phrase “of the church”. What could “of” be in Italian”? Could it be “a”? Holy shit no way! I leaned toward Stacy and said “I think the answer is a cappella and that it could really mean “of the chapel”. We wrote down my answer and lo and behold I was right! Some teams argued that it didn’t mean “of the church” but the host looked it up, said that it was derived from “of the church”, or more specifically “of the chapel”.

We were in the lead going into the final question although not necessarily comfortably because there were worthy adversaries amongst us. At that time we realized that since the free answer of the night had not been use yet that it must be part of the final question. We also patted ourselves on the back for thinking about Netflix original programming earlier in the evening since the final question would probably have us list the shows that Netflix has produced.

Now let me divert your attention for a moment. For the longest time I always wanted trivia to reward the people who notice things like the interstitial music played throughout the night. I always thought that the first category of a round could be “Instant Trivia” and the question would be something like “Name the song I just played.”

You guessed it! I can’t pull anything over on you…

As an added bonus of five points the host asked us to name the band for whom he had played two songs during trivia.

Being the quality trivia players that they are both Stacy and Aron also picked up on the fact that the host played two songs by The Killers. We were en fuego.

We finished in first place. 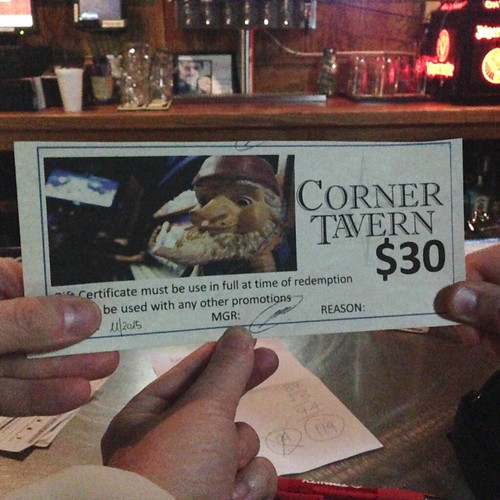 At the end of the night Stacy hooked us up with a Lyft ride back to her place. The car showed up nearly immediately and the driver was a hoot.

All in all a near-perfect night.

Why wasn’t it perfect? I swear that I heard that Derek was Netflix original programming. For fuck’s sake it says “Netflix Original” on the photo shown on IMDB! However, apparently it originally aired on the BBC prior to being available on Netflix, thus we lost five points on the final question. We also missed a comic book question about a super-villain introduced in the 1950s. I think those were the only two things we got wrong, well, if you ignore the multiple misspelled words I uttered throughout the night.

Have a great weekend all!

18 Responses to What Goes Around Comes Around