And I am frustrated beyond belief.

Due to the weather and the fact that I completely “overslept” after a horrible night of sleeping I wasn’t able to get a ride in this morning. I’m crankier about this than I’d normally be because I also failed to get out on the bicycle yesterday; the reasons will be explained momentarily.

Frustrations Started Saturday Morning
I woke early on Saturday but decided not to go out for a ride before the Bundesliga Breakfast because I was feeling anxious about time, so I relaxed at home instead.

By 9:00am I was ready to leave for Colony Square, though it probably took me 5-10 minutes more to do so, and thankfully on Saturday morning traffic was almost non-existent. I arrived at Colony Square a little after 9:30am to find that the Goethe Zentrum uses Dish Network for the soccer viewing; long time readers of this space know of my connection to said service, and they were having difficulties. Because of my connection (as well as my 401k holdings) I tried to call Dish to get an explanation of the difficulties, to no avail. At some point one game was discovered on a channel that could be tuned and the crowd of fifty or so had their FuÃŸball.

I watched the game for awhile but realized that was all I was doing since my language skill does not yet allow me to hold a conversation in German. Upon realizing this I decided to leave and use the found time to go for the bike ride I’d not done earlier. Parking for fewer than three hours at Colony Square cost me $10.50(!); not going to do that again! If/when I return for Bundesliga games I’ll secure a cheaper/free spot somewhere and walk to Colony Square.

Even The Best Part Of The Weekend Had Drawbacks
By a little after noon I was on my bike, targeting a 25-mile ride. It’s a good feeling to think of a 25-mile ride as a short/easy ride. In fewer than two hours I was home again.

With the exception of the “sick weeks” I’ve been averaging three rides per week, but failed to realize that most of these occur in the early morning or late afternoon. Saturday’s ride left me a little red around the face, back of the neck, and arms because I eschewed sunscreen.

After completing my journey and resting for a few hours I wandered up to the village to catch the final half of the day’s racing at the East Atlanta Criterium.

I even brought my camera. Oh look, a photo! 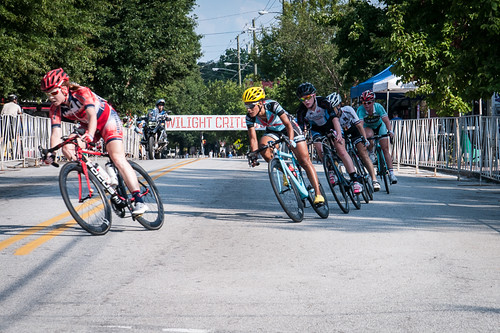 I took a ton of shitty, out of focus shots, and a handful that I am willing to share with the world. Something about not shooting and losing one’s skills…

My day was going swimmingly, running into friends occasionally but keeping my focus on photography. Weeeell, that’s not completely true, I’d had two beers before I even shot for a half-hour. I then ran into an old Flickr friend Greg, and that’s when the real drinking and lack of shooting began. Greg was stationed at The Elder Tree Public House and had some interesting people (read “women”) with him, so I stood, and drank, and stood, and drank.

While standing outside of Elder Tree I also ran into Jackass, as well as ITP-Reader(?) Martha and Jerry. I think I had good conversations with each, but honestly I had at least four beers and very little food in me by that time so I’m not entirely sure. The fact that I think that I held a conversation with Jackass may be the smoking gun that proves that I’d had too much to drink. 🙂

My night ended at The EARL where I ate an amazing catfish po boy (have I mentioned that I’d been drinking?), am sure I was a bit of an inadvertent dick to someone, and half-heartily agreed to ride in at least one Sunday morning group ride that meets a 9:00am.

Oh Sunday…
While I awoke with enough time to make it to either group ride, and honestly wasn’t hung over, I decided against it. By Jeebus it was Sunday and I wasn’t going to ride 25, I was going to ride 40+, until I didn’t.

Before I knew it the clock struck noon and being literally burned the day before by the sun I decided to wait it out some more. Besides, I was being productive in the house, why leave.

By 3:00pm my hunger was starting to grow, so I devised a plan that would both get myself the one meal that I was going to eat, as well as get me to a QT where I could gas up the M6 and refill my wallet of the cash I’d spent on Saturday.

Instead of going out for a late-afternoon ride I returned home where I did some German homework, napped, started learning the latest iteration of Apple’s newest programming language “Swift”, goofed off, and talked to my mother on the phone for awhile. I paid the price for late sleeping and napping by not being able to go to sleep until past midnight, and then sleep I got was terrible.

Time To Update The Sidebar Again
I received an email this morning informing me that HELMET Salon had ended its ten-year run in the East Atlanta vicinity. This marks the second place to high-tail it out of the neighborhood in the past two months, the first being Urban Cannibals, who shuttered their flagship stores for more profitable neighborhoods after five years in the ‘hood.

Oh well, the times they are changing…