Knew I Should Have Written This Last Night

Poop, I’m struggling this morning. I also accidentally upgraded my work iMac to Xcode 7, something I really didn’t want to do this week. This means that I will have to pull a rabbit out of my hat by Wednesday, thanks to Apple’s new coding policies that come with Xcode 7.

I Submit For Your Approval
Saturday was a beautiful day to be out riding. It was even better if you could latch onto a few trains and use the power of the peloton to keep you moving at a pace that you cannot do yourself.

As you can see I averaged 18.1 mph for the entire ride. For the portion that I was able to latch onto trains, mostly within the first forty miles, I was able to average nearly 20 mph!

I failed to remember to take a selfie at the end on Saturday. So, here’s one I took at the end of the 2008 Beautiful Backroads Ride, before selfies were all the rage. Just imagine me seven years older and much worse off health wise. Oh, and on Saturday I also rode two more miles than I did on that day in 2008. 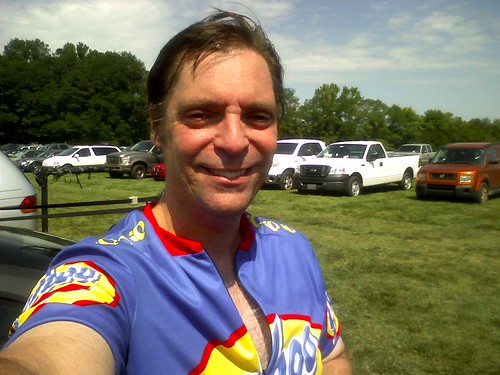 Unlike on that day on Saturday I wore my Gators jersey. Much to my surprise I only received on “Go Gators” and that was at mile 50.

Perhaps the biggest failure of the day was the beer selection at the end; the choices were — Bud Light, Bud Lime, Budweiser, Michelob Ultra, and one other beer that I can’t remember. Now I know that I was at a Budweiser plant, but seriously, couldn’t they have had a beer from one of their fake craft brew labels?

ITP-Reader Steve: I have your t-shirt, the entirety of the day’s schwag.

Oh Holy Ride
You’d think that I’d be able to remember that one of my bike shorts has a hole in it; hell, I even wrote about it in this space. Even though I dressed in the house this morning, in a fairly well-lit room I failed to remember this fact.

Today’s morning ride, have to get them in while I can, was done wearing a pair of shorts that has a nice hole in the inner left thigh. At least most of my riding was done in the dark so not too many people would have noticed.

6 Responses to Knew I Should Have Written This Last Night