As I drove in to work today, pleasingly quick I might add, I recalled what time of year it is and the fact that I’ve yet to have a Pumpkin Spice latte from Starbucks. I must have really wanted one because I literally forced my way into the lane in which I needed to be since the traffic around me was nothing better than a rolling roadblock aimed at keeping me away. Perhaps they knew better than I did.

I pulled into the parking lot and remembered that the balance in my Starbucks account would not be enough for a latte so as I walked toward the entrance I attempted to reload my account with funds.

Did you know that the current iOS Starbucks app doesn’t have 1Password integration? Frustrating…

After switching apps and retrieving my Starbucks password I realized that the credit card stored in the app is not longer valid, so I had to add a new one. Again, no 1Password integration, so I had to switch apps to copy the number for the credit card. Frustrating…

At this point I was at the counter so I resolved to pay with cash. I tried to order a “skinny” Pumpkin Spice latte, but was told that was not an option, so I settled for the “fatty” one. Frustrating…

While waiting for my drink I decided to try to reload the balance in my Starbucks account. After entering all of the credit card information I was told that I needed to enter my Starbucks password again, you guessed it, I had to switch back to 1Password to copy that. Frustrating…

And then my balance was increased?

No, I received an error that Starbucks could not process my payment with the information provided. Frustrating…

Did you know that the Starbucks app doesn’t allow you to edit nor delete any of the credit cards that you’ve provided to their app? At least I could find no way. Frustrating…

Being completely pissed off, I gave up.

At that point I wondered if I could have used my Apple Watch to pay using ApplePay. So, since I was driving I asked Siri. And this was Siri’s answer: 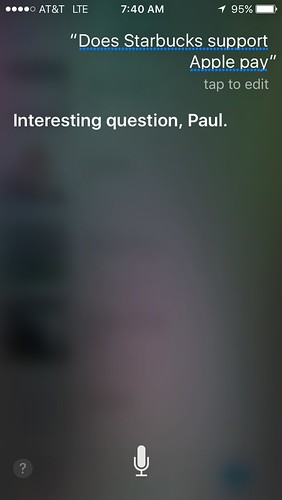 Siri’s answer was no answer at all. Frustrating…

And to top it all off? It was the worst tasting Pumpkin Spice latte I ever drank. Frustrating…

For Me It’s Turned Into The Worst Series
Oh, my Mets. Now down by two games. It doesn’t look good.

The “Glass Half Full” version of me thinks that I should be happy because I never envisioned the Mets making it the World Series this year.

The more prevalent “Glass Half Empty” version of me is disappointed and is prepared to accept their failure.

Putting My Money Where My Ears Are
Last night I decided to drink one fewer beer a month and redirect that money to supporting Radiotopia at the $4/month level for their current fundraising campaign. I like listening to some of the podcasts produced by Radiotopia, so this really wasn’t a hard decision.

$4/month.
Not even to purchase one full fancy-pants beer at a bar.
Cheaper than buying one of those magazines I see at the checkout counter in Target.
I think I’ll survive.

Oh, and I’ll also get a cool challenge coin sent to me for my financial contribution, so beware when you see me in a bar in the future.

I’ve decided to take a break from trivia tonight and go to Horizon Theatre instead.

It’s not that the team needs me, I’m just a (wee little) bit player. Besides, I’m just the weak-hitting utility infielder who plays for the during the regular season but is not talented enough to make the playoff roster.

I’m certain that [insert alternative nickname for the “trivia nerds” here] will win handily without me, and even better for them they’ll all get an extra $1.50 (1/4th of my $6 from our $30 in house cash) off their tab — it’s addition by subtraction.